New Breed Fighters has been churning out amateur MMA events in for a while now and New Jersey MMA pioneer Alex Wilkie has been churning out fighters, so it was only a matter of time before a fight card came along that pitted competitors from a number of different camps against Wilkie's best up-and-comers. Well, that scenario is going down on Saturday night at the Resorts Casino with NBF's "Wilkie's Warriors Against the World". The fight card here - www.wilkieswarriors.com/schedule.html - and a quick glance reveals Wilkie's students will be facing representatives from Team Carmine Zocchi, MFS, Kassaki Kai Karate, Team Emerson Souza and NYC BJJ, among others. How confident is Alex Wilkie in his team? He's apparently offering a $150 gift certificate to Gallagher's Bar & Grille (which is in the casino) to anyone who defeats one of his guys. That's pretty cool. MMA Journalist will be home watching Strikeforce that night, but if you're in , this NBF installment is definitely worth checking out. 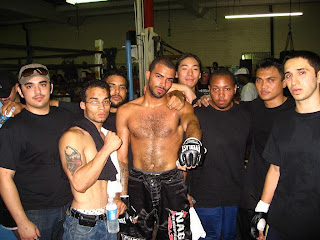 Kenny Florian: "I Was Winning Until BJ Beat The Piss Out Of Me"

Lightweight contender Kenny Florian may have been defeated in his UFC 101 scrap against BJ Penn, but according to a recent radio interview, the Massachusetts native feels he was ahead on the scorecards until they actually started fighting. "I was winning until BJ beat the piss out of me," said Florian, who for four rounds managed to batter the Hawaiian's fists with his head before succumbing to a choke. "I mean, up until when the referee said 'go', I was kicking his ass. You could see it on BJ's face." The night ended with Florian tapping out. But the TUF 1 veteran insists that before that, and before the referee even said 'go', he was in Penn's head and on the verge of victory. "Honestly, I had him right where I wanted him, right where we'd planned on him being. I mean, if not for the hellacious beating I took on the feet for the duration of Rounds 1 through 3, and the takedown and dominance he exerted over me on the ground in Round 4, I would've at least gotten the decision."
Posted by Jim Genia at 3:02 PM No comments: