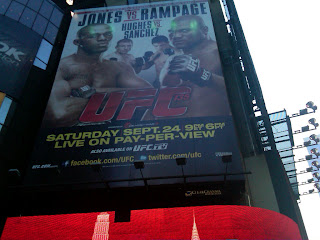 Sent from my BlackBerry® smartphone with SprintSpeed
Posted by Jim Genia at 6:15 PM No comments:

The sport has lost another.  Details are sparse, but it appears that Chris "Big Poppa" Schnake passed away over the weekend.  For those who don't know, Schnake did just about everything there is to do in MMA - he was an announcer, a commentator, a media personality… heck, he even stepped into the ring to fight once.  He was truly a renaissance man, and when I first met him back at a local Brad Kohler show in Minnesota in 2002, he masterfully kept the crowd laughing in between bouts.  Rest in peace, Big Poppa Schnake.  You will truly be missed.

Someone Unimportant is Upset, Or Something

From the New York Daily News this past weekend: http://www.nydailynews.com/sports/more_sports/2011/08/27/2011-08-27_if_fox_pushes_promos_for_november_ufc_matches_during_mlb_playoffs_bud_selig_migh.html.  A nice rebuttal from the MMANYNOW blog: http://nymmanow.blogspot.com/2011/08/raissmans-ranting-by-michael.html.  Here's the gist of the Daily News piece, as spoken by a three-year old: "Wah, wah, Fox will advertise MMA during baseball games. Wah!"  Here's the gist of the rebuttal, as spoken by an adult: "Ugh, why did I have kids?"  Heh.

Evolution Fighting Championships 7 to Feature the Debut of "Pistol Pete"

Steve Katz’s Evolution Fighting Championship returns for its seventh installment, touching down at the Rahway Rec Center in Rahway on Saturday night, and like most amateur shows in New Jersey, there are about fifteen bouts on the mega-card, each one comprised of dudes who could very well be the next pro superstar.  But the one name that leaps out at me – and who would make the price of admission absolutely worth it – is Peter Lampasona, who’ll be stepping into the cage for the first time.  Who?  “Pistol Pete” Lampasona, the journo behind www.USCombatSports.com.  It’s always a curious thing when a fellow media member takes the fistic plunge, but with Lampasona, you just knew it was a matter of time before he had to satisfy his bloodlust.  After all, when you possess Vitor Belfort’s hand speed (as per Belfort’s fight against Joe Charles) coupled with Murilo Bustamante-level grappling (as per Bustamante’s fight against Dave Menne), it’s almost a crime to not be out there clobbering folk.

MMA Journalist won’t be able to make it out to Rahway for the fight, as there’s a UFC that night that needs to be liveblogged (for www.MMAConvert.com).  But I shall be there in spirit.  And for sure my spirit will be cheering Pistol Pete on.

I don't know what it is, but something about the sport's early days in Brazil fascinates me.  Maybe it's the gritty, real nature of the thing, maybe it's that it resembles so closely underground fighting (as I know it), but yeah, it's cool.  Anyway, here's Dave Meltzer's latest, which is a trip down memory lane when Helio Gracie was fighting Waldemar Santana and Brazilian politicians wanted to ban everything.  http://sports.yahoo.com/mma/news;_ylt=AlRlZRAvAs_HkWXArZJP7rI9Eo14?slug=dm-meltzer_ufc_brazil_vale_tudo_rio_081911

The Definition of "Huge"

The UFC airing live shows on FOX is huge.  The Ultimate Fighter on FX - live, with match-ups voted on by viewers - is huge.  The plethora of pre- and post-shows across the FOX platform is huge.  The expanded universe of reachable viewers, which in turn means greater exposure for the sport, is huge.  As per today's UFC/FOX press conference, MMA has reached perhaps the milestone to end all milestones as it now takes its rightful broadcasting place amongst sports like baseball and football.  In effect, MMA is now mainstream.  And that, my friends, is the very definition of "huge".

“The Ultimate Fighter” season 14 in September will be our last. We are increasing our commitment to distinctive, original series that we own such as “Auction Hunters” and “Bar Rescue” which are delivering on our goal to reach a broader audience. Our 6-year partnership with the UFC has been incredibly beneficial in building both our brands, and we wish them all the best in the future.

Five Reasons to Be Excited for ROC 37

The August lull is upon us, and lo!  What looms around autumn’s corner but Ring of Combat 37!  ROC 37, with its fairest of fisticuffs and promised vistas of violence, gracing the hallowed halls of the Tropicana in Atlantic City and bearing upon its shoulders the anticipated satisfaction of the release of a summer’s pent-up aggression.  It is not for the faint of temperament and weak of constitution, mind you; but for those keen on witnessing rapier-sharp skill in action plus a willy-nilly donnybrook, it soothes better than any salve.  Behold!  For the unconvinced, five very good reasons to be excited for ROC 37:

Mixed martial arts lost another one of its own yesterday, as noted trainer Shawn Tompkins passed away at age 37.  Details are pretty much nonexistent at this point, and more will be known pending an autopsy.  What is known is that through his coaching and expert kickboxing tutelage, Tompkins touched the lives of many - and, in particular, Canadian fighters Mark Hominick, Sam Stout and Chris Horodecki.  I never knew him, as he moved outside of my Northeast MMA circles, but the man's impact on the sport was undeniable.  Rest in peace, Shawn Tompkins.  You will be missed.

The First Ad for RAW COMBAT 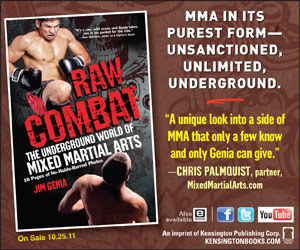 Geez, what’s a guy got to do to get a UFC lightweight title shot nowadays?  To hear Jim Miller tell it, who knows and it’s better to just not care.  Which is an understandable mindset, given that Miller has only lost twice in 22 fights, and those losses were to champ Frankie Edgar and number one challenger Gray Maynard.  In the meantime, Miller has racked up wins against everyone from TUF winner Mac Danzig to supposed “next big thing” Charles Oliveira to the allegedly unstoppable Kamal Shalorus (who Miller stopped in a big way), and on August 14 he’ll take on ex-WEC champ Ben Henderson at UFC on Versus 5.  Think a win there will earn him a crack at the belt?  Guess again.  But thanks to a source inside Zuffa addicted to Cheetos and a leaked internal memo, MMA Journalist has discovered just what it is Miller has to do.  To get a shot at the 155-pound title, Jim Miller must first: