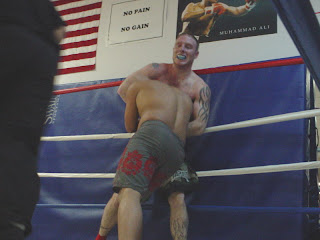 The Skinny on John Doyle

The folks at M-1 Global circulated a press release the other day stating that Nick Thompson was injured and would be unable to fight French fighter Karl Amoussou at their August 28th M-1: "Breakthrough" show, and that Thompson would be replaced by veteran Northeast competitor John Doyle. Who is John Doyle? A quick glance at his record and one sees an awful lot of losses - six recent ones in row, in fact. But there's more to the Pennsylvania-based wrestler than that.

When Doyle debuted back in September, 2006, he was raw as hell. Yet no one could stop his takedowns or impede his dogged ground and pound, and when it came down to it, no one could match his heart. He ended up winning a Combat in the Cage championship belt at light-heavyweight. Unfortunately, talent alone doesn't cut it when you start facing the likes of Ricardo Romero, Rafael "Feijao" Custodio and Costa Phillippou - guys who are top-level fighters. Add to that equation that fact that Doyle has sometimes been inconsistent with his training, and has taken too many fights on short notice, and it's easy to explain the downward slide. But the dude is tough, and if he goes down, will invariably go down swinging no matter what. Keep that in mind on August 28th.
Posted by Jim Genia at 11:34 AM No comments: