The best part about Shine Fights' "Worlds Collide: Mayorga vs. Thomas" event on pay-per-view isn't that the price tag is about 20 bucks, nor is it that we'll get to watch Din Thomas wreck boxer Ricardo Mayorga (Don King injunction be damned), or that we'll get to see Murilo "Ninja" Rua, Nick Thompson and Jamal Patterson in action.  No, the best part about the show on Saturday night is that Bruce Beck is doing cageside commentary.  There are professional play-by-play announcers, and then there's Beck, who is the absolute best in the business - something evident from his stint as one of the UFC's first mic-men to his long-running gig as a sportscaster for NBC News here in New York.  I admit, I was barely cognizant that this event was coming up, but once I heard that Beck was working it, well, let me just say I know what we're going to be watching in the MMA Journalist household on Saturday night.

The Big Winners and Losers Coming Out of UFC 113

Mauricio “Shogun” Rua knocked out Lyoto Machida to become the new light-heavyweight champ, Josh Koscheck earned the unanimous decision over Paul Daley, Matt Mitrione TKO’d Kimbo Slice, blah, blah, blah.  Forget the individual results of the bouts and who snagged themselves a belt or a shot at the title, because coming out of UFC 113 the biggest winners and losers didn’t have their records marked with an “L” or a “W”.  No, those who benefited and suffered the most did so indirectly and in a fashion not easily seen by the untrained eye.  Thankfully, here’s a list of Saturday night’s big winners and losers, in no particular order.

Big Winner: Strikeforce – For hearing the final bell, picking himself up off the ground and feeding his opponent a post-fight dose of fist salad, Brit striker Paul Daley got himself kicked out of the UFC.  Kimbo Slice, meanwhile, got the boot for sucking.  Ultimately, that makes Strikeforce the big winner here, as now the brand of MMA fighting that is decidedly not of the Octagon variety gets to insert a young, brash thug and an old, reformed thug into their freakshow menagerie rotation.  Want to see Daley lose to Nick Diaz, punch him in the back of the head after the bell and get stabbed?  Want to see Kimbo vs. Herschel Walker, Kimbo vs. Bo Cantrell II or even just Kimbo vs. a treadmill?  Tune in to Strikeforce on CBS, and check your local listings for dates and times.

Big Loser: Karate – When Machida knocked out Thiago Silva at UFC 94, approximately 800,000 karate refugees ran to their closets and dusted off their black gis with the patches of a yin-yang symbol and a fist punching an eagle in the crotch sewn on the shoulders.  Then, when the Brazilian destroyed Rashad Evans, those same refugees began practicing the heretofore forgotten “MMA kata” with pride.  Well, the Empty-Handed Way once again suffered a blow on Saturday night, and much like when Royce Gracie made Minoki Ichihara his bitch at UFC 2, it’s doubtful it will ever fully recover.  No amount of board-breaking would’ve prevented Shogun from crushing Machida, and there is no “kiai” battle cry loud enough to stop a right hand to the dome – two revelations that are once again illuminating the sad truth that the karate dojo a great place to pick up chicks but a crappy place to learn how to fight for real.

Big Winner: Dan Severn – When UFC Hall of Famer Dan Severn burst onto the scene at UFC 4, he was a wrecking machine of takedowns and ground and pound, and he blazed a trail in this new sport that countless wrestlers have followed.  But the man with wins over the likes of Ken Shamrock, Paul Buentello and Forrest Griffin saw his last venture into the Octagon end in defeat at the hands (actually, leg-kicks) of Pedro Rizzo at UFC 27, and nearly ten years passed before we saw him in action again.  God bless the 51-year old for returning at UFC 113.  Looking somehow young, svelte and rejuvenated, and possessing far better boxing than he’d ever shown in his early days, Severn was almost like a new, completely (and genetically) different man.  Though he may have lost via choke to Joe Doerksen, Severn showed the world on Saturday night that the “Beast” is still a force to be reckoned with.

Big Loser: The Douchebags of the World – Webster’s New and Improved Deluxe Dictionary defines “douchebag” as “someone you just can’t help but to hate”, and on Saturday night – with Koscheck faking an injury from a phantom illegal knee to the head and Daley landing an extra-curricular punch – even the world’s douchebags were throwing their sneakers at their television screens.  Is it possible to dislike a pair of fighters in a bout so much you hope they somehow both lose the decision?  It is possible for a crowd to boo a fighter so harshly that it counts as a loss on their record?  Going in to their UFC 113 bout, we all knew Koscheck and Daley were going to be cast as villains in the epic saga that is the wholesome Georges St. Pierre Show, but who knew that by the end of the night even the drug dealers, kidnappers, pirates and overly-aggressive panhandlers of the world would want to disavow all relations to them?  For their despicable behavior, Koscheck and Daley seemingly did the impossible: they gave douchebags a bad name.

Big Winner: The Facial-Reconstruction and Plastic Surgery Industry – As per the Unified Rules of Mixed Martial Arts, spiking an opponent on their head is bad.  Very bad.  But slamming an opponent on their face?  All good in the ‘hood, bro.  Don’t believe it?  Just ask Alan Belcher, who picked up Patrick Cote and drove the Canadian’s grill into the canvas with the kind of force that would make two men married under the laws of New Hampshire, Massachusetts and Vermont.  Unfortunately, with the discovery of this loophole in the rules comes the inevitable proliferation of fighters with completely messed up mugs – which should prove to be a boon for the facial-reconstruction and plastic surgery industry.  Suddenly ugly because Brock Lesnar sat on the back of your head?  Fear not!  For a fee, you can get fixed right up.  After all, it worked for Wanderlei Silva, didn’t it? 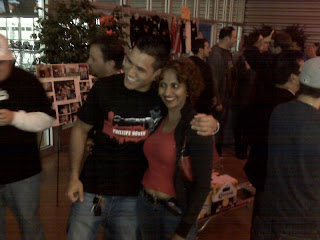