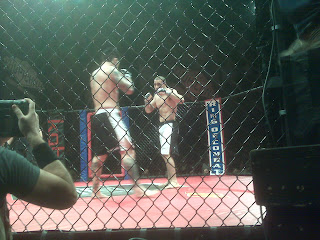 ROC 28 to Feature a Clash of Titans

Usually, the first incarnation of a fight card is the best, containing therein match-ups of both the relevant and compelling variety.  And usually, for whatever reason, some (or most) of those match-ups fail to materialize, leaving behind less-than-stellar pairings that pale in comparison.  Friday’s ROC 28 just kicked that whole concept in the ass.  Two of the toughest and most promising fighters in the Northeast – Team Tiger Schulmann’s Uriah Hall and Team Serra/Longo’s Costa Philippou – have been added to the roster, and because they’re elite strikers known for utterly outclassing opponents on the feet, their meeting could outshine everything else on the card.  They are literally titans, clashing in what should be a battle of epic proportions.  Thus far, no one has been able to withstand the heat Hall brings into the cage, and though Philippou has a loss on his record, it was from a close decision he suffered when top dog Ricardo Romero got sick of getting punched in the face and took him down.  Folks, the chances of Hall trying to take Philippou down hover around “nil”.  Conversely, the chances of there being fireworks when these two meet on Friday – the kind of fireworks that set off fire alarms and injure innocent bystanders – are high.  Very, very high.  ROC 28 was worth the price of admission because rising star Ryan LaFlare was taking on Justin Haskins, Louis Gaudinot was scrapping with Tuan Pham, Andy Main was throwing down with Lester Caslow, and Andre Gusmao and Brendan Barrett were returning to action.  Now it’s a must-see.