Reformed underground fighter James Funaro, who made a name for himself as a top vale tudo competitor in the New York underground fight scene, will return to the warm embrace of sanctioned MMA this weekend at Asylum Fight League XX in Atlantic City. It's an unprecedented move. Usually, fighters who've crossed over to the dark side of unregulated matches are banned from amateur competition in New Jersey. But "after filing the proper post-UCL paperwork" and getting the necessary medical tests, it looks like the 175-pound Vamos BJJ/BoxFit rep will make the switch. Funaro, of course, is no stranger to bouts with actual rules. Prior to his career as a lawless gladiator fighting to the death, he saw combat at New Breed Fighters, Caged Fury in Ohio, and most recently at Philly Biker Brawl in Philadelphia. "Good for him," said the evil Brian Dennehy, who controls the underground fight circuit in New York. "He deserves to go legit. I wish him luck." Funaro is scheduled to face the experienced Anthony Cruz, and the AFL 20 card will also feature amateur mainstays Thiago Carfi, George Siderias and Cuba Gooding Jr.
Posted by Jim Genia at 4:09 PM No comments: 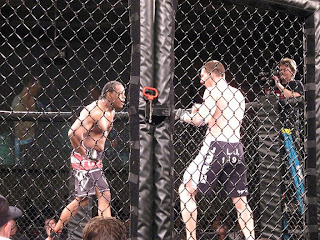 After realizing that Kimbo's fight was the high-point of the season and it will only be a suckfest from here on out, Darrill Spoonodor attempts to find solace in a bottle of booze. Actually, many bottles of booze. And beer. And sangria. And Bartles & James wine coolers. And Boones Farm. "Blimey, Darrill fancies ter missin' link a hoppin' pot ov de booze, innit?" says James McSweeney.

Anyway, Team Rashad gathers for practice, Darrill by now intoxicated out of his mind, stumbling about and muttering something about "Winky-Dinky Dogs". Coach Evans ignores him, even when his heavyweight ward vomits on assistant coach Mike Van Arsdale, and the ex-champ introduces guest coach Kru Phil Nurse, who teaches Team Rashad about greasing and other anti-grappling techniques. Immediately, Kru Phil Nurse begins rubbing everyone down with Vaseline.

Team Rampage, meanwhile, is having a hard time coping with their nonstop string of losses, and coach Jackson, on day nine of another sleepless, Red Bull-fueled bender, begins to hallucinate. The focus of his hallucinations: Darrill Spoonodor's chest, which in his addled mind resemble "titties". "Titties!" Jackson calls out to Darrill Spoonodor's chest. He attempts to suckle, but the drunken TUF contestant rebuffs him. "Titties!" Jackson cries.

Then everyone lines up for the "Which Rampage Fighter Is Going To Get Beat Next?" ceremony, and as Team Rashad has the ball, coach Evans gets to choose. He picks Darrill Spoonoder to face Zak Jensen, wildly believed to be the weakest link of Team Rampage - nay, the entire TUF house - nay, the entire world. Zak Jensen is purported to be a delicate flower, capable of much love and caring and absolutely zero fighting. At that point Darrill Spoonodor begins shouting at a heavybag and gesticulating wildly. "You son of bitch, you've been staring at me all night. You think you're tough? I'll kick your ass!" Except Darrill Spoonodor is pretty far gone at this point, so when he talks it sounds like his cheeks are full of bar pretzels. And maybe they are.

"Titties!" wails Jackson. "Titties, titties, titties!" He begins waving around dollar bills in a vain effort to get Darrill Spoonodor to dance for him.

Back at the house and everyone is counting down the minutes until Zak Jensen crumbles. Wes Sims starts a pool, marking off on a calendar each housemate's guess. Some wager sooner. Some wager later. Zak Jensen himself even marks off a day on the calendar, then returns to his poetry in the bunk above Wes Sims.

It's training time, and again we're treated to more reasons as to why Zak Jensen sucks. But when he's accidently cut above the eye during a scramble, we're given hope: could this be Kimbo Slice's opening to re-enter the competition? Sorry, Kimbo, no way. If you were going to fight, this episode would have garnered another massive bombardment of SpikeTV press releases hyping the show. And that obviously didn't happen.

Hijinks at the TUF training center! While coach Evans has brought in Kru Phil Nurse to help out his team of upstarts, Team Rampage assistant coach Tiki-Tiki-Head (yes, his head his a giant wooden Hawaiian statue of a head. Word? Yeah, word.) has brought in a cartoonist. Hmmmm... If Team Rampage members keep losing by submission and their coaching staff consequently provides them with a cartoonist, what would the coaching staff have provided if they kept losing by strikes? A violinist? A giraffe? Anyway, the cartoonist draws caricatures of the various members of Team Rashad, with Darrill Spoonodor in a bra.

"Titties!" Rampage implores, and he begins dry humping a nearby stationary bike.

"Titties?" Jackson says, the hurt and confusion in his voice clear as day. "Titties, I - I loved you." 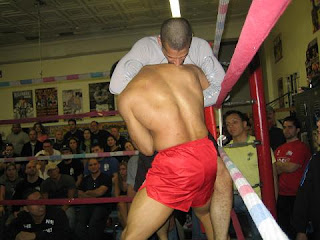