According to a press release issued by Strikeforce, the organization has now signed the elusive Fedor Emelianenko to a multi-fight contract, with the Russian's first fight to air on Showtime in the fall. No word yet on specifics, such as date, location or opponent, but upon hearing this news UFC Chief Grudge Bearer Dana White reportedly ordered minions to deface Scott Coker's lawn in a fit of rage. The Strikeforce promoter's San Jose home was then allegedly assaulted with bags of flaming manure while a Honda Civic spun donuts on Coker's well-maintained turf.
Posted by Jim Genia at 12:52 PM No comments: 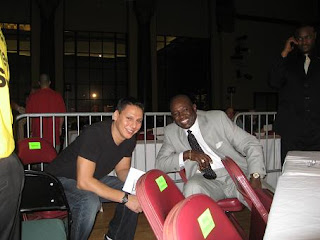 A Piece of MMA History: "Battle at the Boardwalk"

Once upon a time (actually, February 18th, 2006), an Ed Hsu-run multi-discipline martial arts event came to the Atlantic City Convention Center. The event had everything - point karate matches, choreographed demos, boardbreaking, guys with foam katanas and naginatas beating on each other - and for MMA aficionados, there was a pro fight show at night. But history was made during the day, when Battle at the Boardwalk hosted New Jersey's first sanctioned amateur MMA event. From his seat cageside, USKBA grand pooba Paul Rosner coordinated the inspectors and judges, while within the cage, fighters like Greg Soto, Andrew Montanez, Derek Hopkins, Tim O'Connor and John Salgado threw down using new rules designed to make MMA more palatable to those aspiring fighters willing to step up. The experiment worked. Fifty billion events later and it seems that the whole amateur MMA industry has surpassed the pro side in terms of sheer volume (Kipp Kollar's Reality Fighting held an amateur event in Wildwood, New Jersey this past weekend; New Breed is holding a "Wilkie's Warriors vs. the World" event in Atlantic City in less than two weeks). That's a good thing. MMA is MMA, whether the competitors get paid or not, and today's amateur stars could be the pro superstars of tomorrow. And it all began with Battle at the Boardwalk.
Posted by Jim Genia at 11:38 AM No comments: 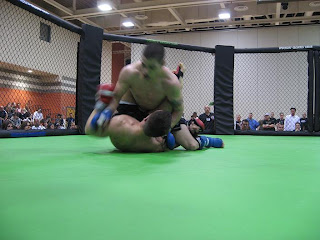 Some worthwhile links for you: 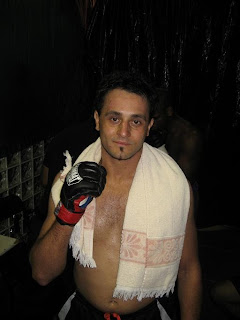 A Review of "Welcome to the Underground"

Director Nick Oddo has completed his documentary on Peter Storm and New York City's Underground Combat League, and MMA Journalist attended a private screening on Staten Island yesterday. The film, called "Welcome to the Underground", covers a wide swath of UCL history exploring the promotion's origins and growth, and it doesn't shy away from delving into Storm's perspective and personal life along the way. It's at its most compelling when it centers around the underground fighters and their fights, and the events' behind-the-scenes happenings. I've been to every UCL except for one (hey, I was in Thailand getting married - cut me some slack), but I had no idea Kirkland Campbell actually talked. Or that Sekou Mau-Mau (the man with tattoos all over his face and a chin made of glass) was so delusional about his own abilities. Or that draining a cauliflower ear could be so gnarly. The documentary covers it all. At this stage, it's unclear where it will end up (maybe HBO, maybe Sundance, maybe somewhere else). It is, however, worth checking out wherever it lands.
Posted by Jim Genia at 10:05 AM No comments: 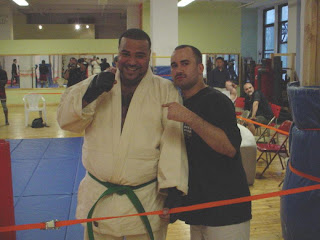 Observations From My Couch: Affliction "Trilogy" 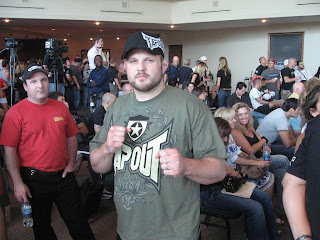