Patrick Cote was finally told yesterday that his UFC 90 opponent is none other than middleweight champ Anderson Silva, a fact that was kept from the Canadian slugger since he signed the generic bout agreement months ago. Cote was reportedly kept in the dark by his management team because no one in their right mind would want to get in the cage with the man who destroyed former champ Rich Franklin twice and made short work of Pride champ Dan Henderson. Standing behind the podium at a press conference when he heard the news, Cote at first seemed shocked, then became dismayed. "Wait, I'm fighting who?" he said before throwing his UFC cap to the ground and storming off the stage. "Yeah, we didn't tell him who he was fighting," said Muay Thai trainer Mark DellaGrotte. DellaGrotte worked with Cote on possible strategies for the UFC 90 bout, including the "go fetal and cry" maneuver and the "tap out really, really fast" technique, and though DellaGrotte was successful in keeping the opponent's identity a secret, he feels strongly about Cote's chances. "If he does what we practiced, he may make it out of the cage alive. Unconscious, but alive." UFC 90 airs Saturday night on pay-per-view, and in addition to the Silva/Cote bout, it features a welterweight match-up between Thiago Alves and Josh Koscheck.
Posted by Jim Genia at 2:26 PM No comments: 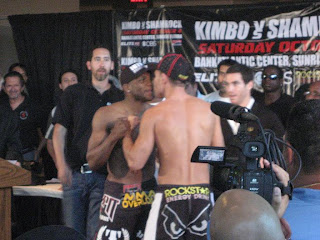 Showtime, the cable network that was home to EliteXC and ShoXC, sent this statement to MMA Journalist yesterday. I guess they got a taste of MMA and liked it. "ProElite officials have advised us that they will not be able to put on the EliteXC event scheduled for exhibition on Showtime on November 8. In view of Showtime's leadership role in sports programming, including boxing and mixed martial arts, we intend to explore other opportunities."
Posted by Jim Genia at 10:47 AM No comments: 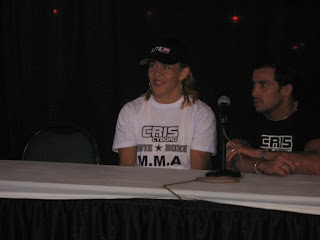 But What About Eddie Alvarez?

The sudden collapse of EliteXC has left more than a few fighters wondering where their next paycheck will come from, but Eddie Alvarez - who was slated to fight Nick Diaz for a championship belt at EliteXC's November 8th Showtime event - isn't all that worried. After all, the dude was BodogFIGHT's big star before they crapped the bed, and he cleaned house in Japan's DREAM tournament not too long ago. He should have no problems finding work. Last night MMA Journalist caught up with the Philadelphia superstar, and got his thoughts on the whole EliteXC debacle. "It's unfortunate for the promotion and it's unfortunate for the fighters who put all their eggs in one basket," he said. "I spread myself out and didn't put all my eggs in one basket, so I'm not too concerned. I have a great manager (Monte Cox) and I'm confident he'll find something for me." Added Alvarez: "I've been through this with Bodog so it's nothing new to me."
Posted by Jim Genia at 10:16 AM No comments: 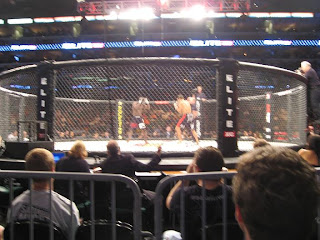 MMA Journalist tracked down longtime Kimbo Slice manager Icey Mike yesterday to get his perspective on the sudden downfall of EliteXC. Here are some quotes. 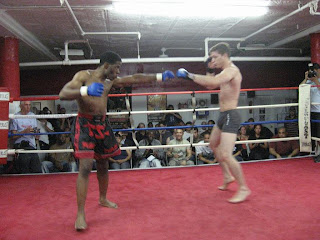 Pick up a copy of today's Newsday (a Long Island newspaper and the tenth largest newspaper in the country) for an article on ProElite's demise written by yours truly. And in case you ever wonder why there's a lull in MMA Journalist posts... yes, it's because I'm cheating on you with other news outlets. I'm sorry you had to find out this way. Link: http://www.newsday.com/sports/custom/boxing/ny-spelite1022,0,2422751.story
Posted by Jim Genia at 9:13 AM No comments: