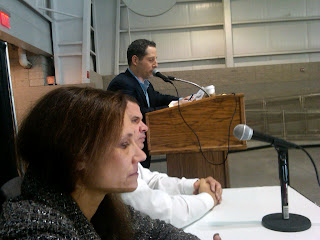 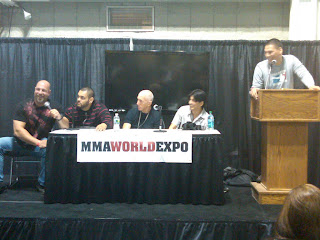 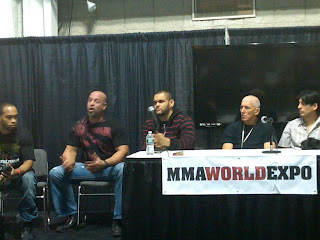 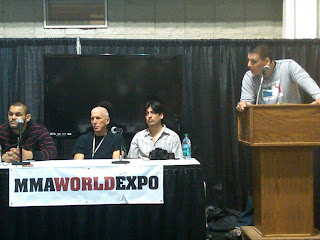 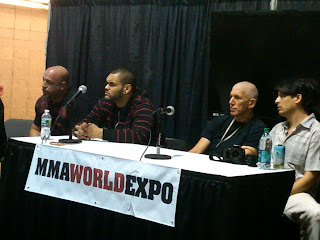 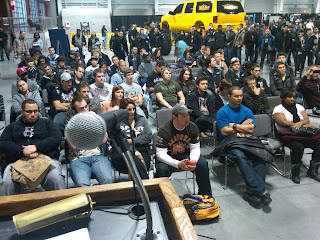 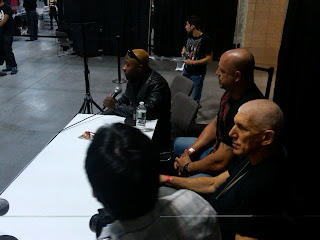 This past weekend was the third annual MMA Expo at the Javits Center in Manhattan, and I ran panel discussions on the underground fight scene both days and sat on the panel discussion about the legalization of MMA in New York. Good times were had by all. On Saturday I had as guest panelists Big Dan Miragliotta (who used to run the old BAMA Fight Night events - New Jersey's original unsanctioned event), photog Anil Melwani, and underground fighters Israel Martinez, Jonathan Rodriguez and Kenny Rivera. On Sunday, the "underground" panel had fighters Harley Flanagan, Joe Funaro and Eric Blasich. (The "legalization" panel on Sunday was run by Justin Klein and had Nick Lembo, Dr. Sherry Wulkan and myself.)

I was big on audience interaction, so to encourage the asking of questions I gave out a copy of RAW COMBAT to anyone who raised their hand and asked something. Of course everyone loved Big Dan - as a UFC ref he's pretty much a celebrity - and lots of people seemed into the discussion. There were only a couple crazies (crazies are to be expected, especially when martial arts is involved), although on the second day some guy stood up and spoke incoherently for like two minutes. I gave him a book to shut him up.

So like a said, good times. Good times.
Posted by Jim Genia at 9:48 PM No comments:

Here's Hurriyet, the largest newspaper in Turkey, showing RAW COMBAT some love. I think. I don't read Turkish so they could be hatin'. http://www.hurriyet.com.tr/yazarlar/19489738.asp
Posted by Jim Genia at 9:47 PM No comments: