Questions to Be Answered This Weekend at ROC 34 and CFFC

Atlantic City: the place to be if you’re keen on gambling, shopping at outlet stores, eating so-so food and heckling streetwalking prostitutes.  And this weekend, it’s also the place to be for some hardcore MMA action.  On Friday, Ring of Combat 34 returns to the Tropicana, bringing with it all its usual fanfare and luster, and on Saturday, the Cage Fury Fighting Championship rises like a phoenix from the ashes to set fire to the Resorts Casino & Hotel and send patrons fleeing into the night.  That’s right, there’s an awful lot of fighting going on this weekend – and hopefully, there will be some questions answered.  Questions such as:

Observations from My Couch: Strikeforce's "Ultimate Nick Diaz is Unstoppable"

Yeah, so, Fedor’s fighting Bigfoot in New Jersey and there’s a heavyweight tournament and if you accidentally mixed together the urine of some the tournament competitors the laboratory where they do the post-fight drug screening would freakin’ explode, blah, blah, blah.  What many have forgotten in all the excitement is that there’s a pretty decent Strikeforce installment scheduled for this Saturday, featuring the likes of Nick Diaz, Robbie Lawler and old man Herschel Walker.  But MMA Journalist hasn’t forgotten, and as proof, here are some nice fun facts about the show!

At this point in the year, Battered Wife Syndrome kicks in and MMA Journalist finds itself gazing longingly at the legislative calendar, hoping beyond hope that this is the year New York finally repeals its ban on professional MMA and embraces the future.  And a quick peruse of the docket tells us that the State Senate has one such bill swirling around in the stew that is theoretically what they’ll be dining on in 2011.  Now, past experience tells us that the Senate could very well agree on sanctioning the sport (like they did last year) and then everything goes to hell with the Assembly, or the Assembly could give it the thumbs up (like they did two years ago) and then everything goes to hell with the Senate, so it doesn’t pay to get your hopes up.  But Dana White and company seemed awfully optimistic at that MSG presser a couple weeks ago – especially at the prospect that the governor would sneak it through the process as an attachment to his budget (which almost worked last year, but that was a different governor).  Really, who the heck knows.  I don’t.  I do know, however, how to read a bill, so here are some tidbits from what the State Senate is chewing on:

Forum on Legalization of MMA in New York Scheduled for Wednesday

Wednesday will bring us yet another gathering of minds on the topic of sanctioned MMA in this wondrous home state of ours.  Titled "Issues Surrounding the Legalization of Mixed Martial Arts in New York", the forum promises speakers of both the lawyer- and boxing promoter variety, and according to the release, "Panelists will discuss the legal and regulatory issues relating to the legalization of mixed martial arts in New York, as well as its potential economic impact if it were legalized."  I don't know how much new ground there is to cover on the matter, but a fresh perspective is always worthwhile.  Expect MMA Journalist to attend and provide the livebloggery.

Observations from My Couch: UFC Fight for the Troops 2 "Ultimate Metamorphosis"

So much news, so little time.  But fear not, as MMA Journalist has turned to ancient Japanese poetry to make it all easier for you to digest.

Predictions for UFC "Fight for the Troops 2"

Saturday night will bring us the second installment of the UFC’s “Fight for the Troops” series, which is an event staged on a military base before a few thousand screaming and cheering troops, all for the benefit of the Intrepid Fallen Heroes Fund.  It promises to be an exciting night - and if the first Fight for the Troops show is any indication, it should be one heck of a dose of carnage.  At the infamous December, 2008, outing, Corey Hill snapped his leg completely and utterly in half, Razak Al-Hassan had his arm broken, Jonathan Goulet was decapitated, and headliner Yoshiyuki Yoshida suffered so much head trauma, for the following four months he thought he was Pikachu.  In short, it was “300”-level madness.  So what’s in store for viewers who tune into SpikeTV?  Predictions! 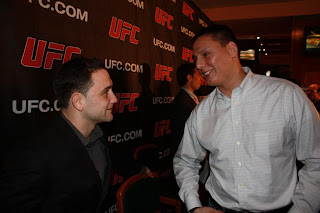 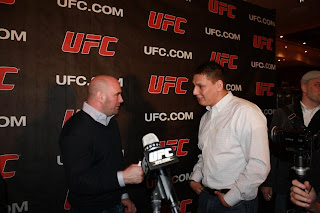 Wondering what your favorite local fighter is up to?  Unable to glean any clues from stalking them on Facebook?  Tired of waiting outside their house with a pair of binoculars and a thermos full of sangria?  Well, fear not, because MMA Journalist has done the legwork for you, and compiled this handy-dandy list. 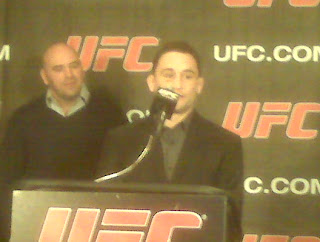 Sent from my BlackBerry® smartphone with SprintSpeed
Posted by Jim Genia at 2:16 PM No comments: 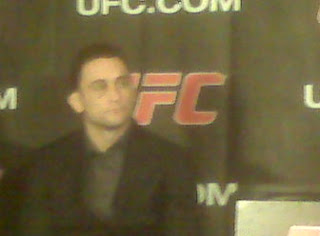 Sent from my BlackBerry® smartphone with SprintSpeed
Posted by Jim Genia at 2:09 PM No comments: 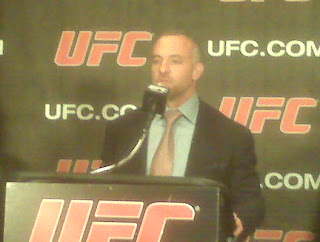 Sent from my BlackBerry® smartphone with SprintSpeed
Posted by Jim Genia at 2:08 PM No comments: 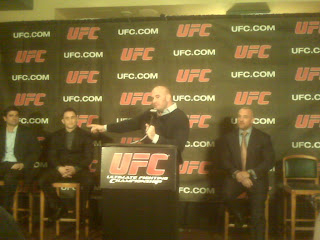 Sent from my BlackBerry® smartphone with SprintSpeed
Posted by Jim Genia at 2:05 PM No comments: 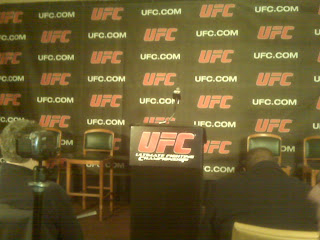 Sent from my BlackBerry® smartphone with SprintSpeed
Posted by Jim Genia at 1:50 PM No comments:

MMA Journalist is here at Madison Square Garden's Club Bar and Grill for the UFC's "bring MMA to New York" press conference. Present are UFC brass Dana White and Lorenzo Fertita, UFC star Frankie Edgar, some MSG exec, Lady Liberty, Travis Bickle the Taxi Driver and a giant subway rat, all of whom are now focused on the singular goal of bringing MMA to New York (Underground Combat League say what?). In terms of press, the gang's all here - The Fight Nerd, Pete Lampasona, Mark LaMonica from Newsday, Mike Chiappetta, Mike Straka, Ariel Helwani, plus a room packed with mainstreamers in suits and ties. Dana's at the podium now, preaching to the choir about how awesome MMA is and the economic benefit it would provide the Empire State. Lorenzo does the same, and MSG's Scott O'Neill follows with his tale of seeing his first UFC - UFC 111 in New Jersey. It is, of course, a lovefest, but the underlying message is undeniable: this is the year for big push for sanctioning. Oorah.
Posted by Jim Genia at 1:49 PM No comments:

For the past few months Shawn Obasi – a veteran of the UCL and one heck of a polarizing figure in the New York fight scene – has been training hard for his pro MMA debut at an upcoming Brick City Fighting Championship.  But the “Wing Chun Man” still had enough time for challenge match against Internet personality Bloodstain Lane in Brooklyn last week, which Obasi won via third-round armbar.  Weighing 278 pounds when he first stepped onto the mat at Alliance BJJ, Obasi is now 210, and apparently very capable of grappling when not knocking opponents senseless.  MMA Journalist caught up with the controversial fighter to get the scoop on what he’s been up to.

Strikeforce Challengers 13: What to Watch For

Tonight’s edition of Strikeforce Challengers features some unusually worthwhile match-ups – unusual because these Challengers events are often half the calories of a regular Strikeforce yet half the flavor.  But that’s not the case with this one, though.  In the main event, two welterweights who’ve made the most of their tenure on Showtime will meet in a clash between beastly wrestler and thrilling striker, while on the undercard another storied judo guy steps into the cage and a pair of ladies clash to determine who may be worthy enough to be sacrificed to the organization’s 145-pound goddess of war sometime in the future.  So if you tune into Showtime tonight (which is free thanks to a weekend-long preview), this is what to watch for:

UFC to Counter Strikeforce Tournament with "Best of TUF" Tournament

In response to the upcoming Strikeforce heavyweight tournament announced earlier this week, the UFC has begun formulating plans for a “rebuttal” of epic proportions – this one involving an eight-man tournament of their own consisting of some of the best, most-compelling fighters to ever grace the TUF House.  The “Best of TUF” event is scheduled for February 12, the same night of Strikeforce’s Fedor Emelianenko/Antonio Silva and Andrei Arlovski/Sergei Kharitonov match-ups, and the UFC’s star-studded ION-broadcast roster includes:

NYC Kickboxing Promotion to Give MMA a Try... In Vermont

On February 25, Friday Night Fights, one of New York City's preeminent kickboxing promotions, will be trying its hand at mixed martial arts.  But unlike previous shows, which have taken place in such subway-accessible venues as Pace University and the basement of the Church of St. Paul the Apostle, this one is going to require some travel.  Playing host to FNF's first installment of cagefighting is the Burlington Memorial Auditorium in Burlington, Vermont - yes, Vermont, the state where New Yorkers go to ski and get blocks of cheddar cheese.  However, Vermont is also the state New Yorkers have been trekking to for some non-New Jersey-flavored MMA, and more than a few underground veterans have been driving up there to throw down.  Is this some sort of promoting test run in preparation for when New York finally sanctions the sport?  Probably, but that's not necessarily a bad thing.  When the ban is lifted here, FNF is going to be one of a handful of established New York-based organizations with all the pieces in place for cranking out decent MMA shows.  There's nothing wrong with FNF being ready.

Outrage over the recently announced Strikeforce heavyweight tournament continues to grow, with angry fans turning online forums into crucibles of cold discontent and burning, seething hate.  At the center of the maelstrom is the fact that the combatants - which include legendary warrior Fedor Emelianenko, Strikeforce champ Alistair Overeem, and former UFC champs Josh Barnett and Andrei Arlovski - will not be completing all bouts of the eight-man event in one night, will not be fighting to the death, and will not be facing Brock Lesnar at any point.  Also at issue is the fact that the UFC logo will not appear anywhere on the cage or in any of the broadcast's graphics.  Said UFCfanboy4life, "This whole tournament is clearly a gimmick meant to diminish the accomplishments of Dana White, who singlehandedly made mixed martial arts into what it is today."  Added ZuffaShill128, "UFC Fight Night 23 will feature Melvin Guillard in the marquee bout and boasts the likes of Matt Wiman, Joey Beltran and Tim Hague on the main card.  Even a blind man can see that the UFC puts out a better product than Strikeforce."  The opening matches of the tournament are slated for February 12 at the IZOD Center in New Jersey, and will see Fedor take on Antonio Silva and Arlovski face Sergei Kharitonov.  It is unclear at this time if fan sentiment will force Strikeforce to cancel the event.

Chael Sonnen Admits to Being Member of Al Qaeda; UFC Suspends Him

Erstwhile middleweight contender Chael Sonnen, who came close to taking champ Anderson Silva's belt then found his career stymied by steroid allegations, has now found himself in a new predicament - this one centering around his recent admission to being an active member of the global terrorist organization Al Qaeda. According to a statement issued by the Portland field office of the Federal Bureau of Investigation, Sonnen recently confessed to extremist ties when answering charges of sedition and treason. The allegations levied against the top 185-pound fighter included:

Upon news of Sonnen's Al Qaeda admission, the UFC promptly suspended the middleweight fighter, striking him from a scheduled UFC 128 bout. Said Dana White, "Look, busted for steroids - no problem. Driving while intoxicated - no problem. High-speed police chase - no problem. But being a terrorist? Sorry, we have to draw the line somewhere."

Observations from My Couch: UFC 125 "Ultimate Frankie the Unkillable"