Another great installment. Despite Jimmie Rivera and Uriah Hall getting scratched from the card, there was still a lot of star power going into the event, and though the home team took some lumps, there was more than enough action to get your heart racing.

-Tom DeBlass once again proved why he’s the hottest prospect coming out of the Northeast circuit. Other than Hulk-like strength, Davit Tkeshelashvili had nothing for him – and that’s not a swipe at the Russian, that’s a compliment to DeBlass. The Ricardo Almeida-trained fighter out-boxed and out-grappled his foe, and it was never boring.

-Pete “Drago” Sell simply got out-struck by Nordine Taleb, and while the fight was unfolding, I couldn’t help but think that the Drago that fought Scott Smith would’ve totally kicked Taleb’s ass. I guess we could blame Father Time, because Drago certainly has more fight left in him. It just sucks seeing a Northeast legend go down like that.

-Performances like what Deividas Taurosevicius put forth are the reason I get out of bed in the morning. Marlon Moraes, who’s a training partner to Edson Barboza and who seemed every bit as deadly, was utterly kicking DT’s ass on the feet, and when it went to the ground, he was kicking our favorite Lithuanian’s ass down there as well. But! Somehow, DT’s escape from back-mount involved trapping Moraes’ arm, and he flawlessly slid into a head/arm choke that shocked everyone in the Tropicana – Moraes included. When DT got the tap, I was sitting next to judge Dave Tirelli, and Tirelli and I looked at each other and simultaneously exclaimed “Holy shit!” That’s what heroes are made of right there.

-Going into the Al Iaquinta/Pat Audinwood bout, I had Iaquinta with the edge in kickboxing and wrestling, a thought that, though Audinwood has a dangerous guard, the Team Serra/Longo standout would be too savvy to get caught with anything. Therefore, I wasn't surprised when Iaquinta tested the Bombsquad rep's chin, was somewhat surprised when Audinwood tested Iaquinta's chin right back, and was even more surprised when Audinwood started seriously threatening with sub from the bottom. And in the end, Iaquinta eventually got caught. Really, this should only be a speedbump in Iaquinta's career, because at the end of the day, no one else around these parts can beat him. It's just that, damn, I guess Audinwood is that good (and yes, I'd seen Audinwood fight many times).

-Drew Puzon vs. Aung La Nsang was a close, close fight, and I actually had Nsang taking the decision two rounds to one. He was far more dangerous on the feet, and his sweeps really put Puzon on the defensive. Oh well. No shame in losing to Puzon, who’s an old schooler that seems to have gotten better with age.

-Brett Linebarger never impressed me in the past, but last night, against Fikret Darzanoff, he looked like a well-rounded badass. Darzanoff was beaten everywhere the fight went.

-Props to Jarred Mercado for getting Jay Isip to the canvas and holding him there. But no way was Mercado ever going to hurt that perfectly-coiffed blond head of hair. No way.

-Ryan Vaccaro did his thing against Mike Prokop, which is wrestle and jiu-jitsu the New Yorker to the bitter end. Props also to Frankie Perez, who finished Allen Cozze with ease; Tom English, who controlled Anthony Facchini on the ground; and Pat DeFranco, who did the same to Rob Gittens, only with more violence. For someone who hails from a boxing school (Ardon’s Sweet Science), Alex Davydov certainly looked knowledgeable in the grappling department, even though he was eventually out-wrestled by Andre Harrison. And the highlight of the undercard was totally Chris Wade’s beatdown of Vinicius Agudo. Agudo looked like some kind of jiu-jitsu stud with the way he transitioned into sub attempts, but Long Island MMA rep Wade was ready for him, and with superior wrestling and ground and pound, he beat the bejeezus out of the Team Link rep.
Posted by Jim Genia at 4:19 PM No comments: 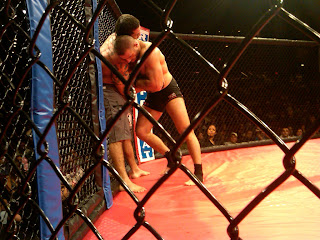 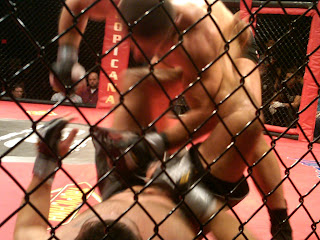 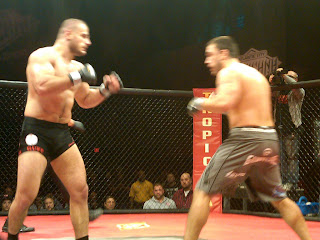 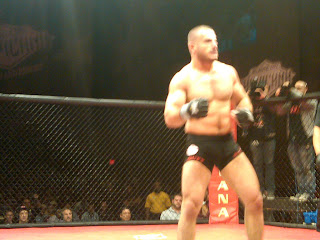 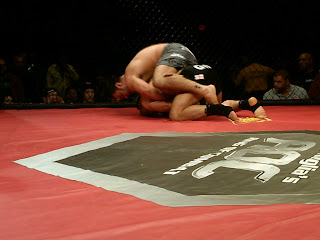 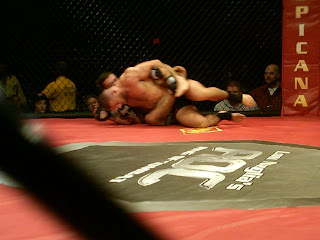 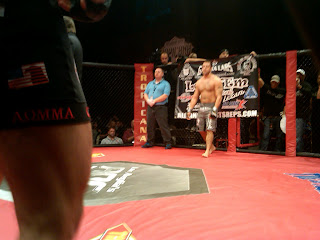 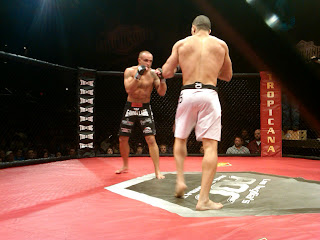 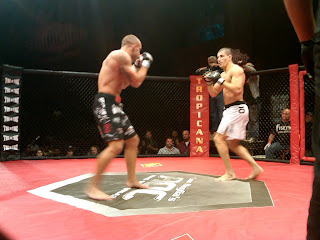 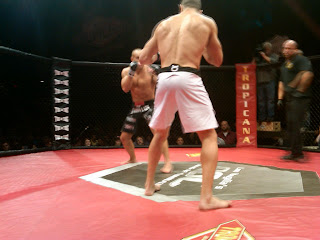 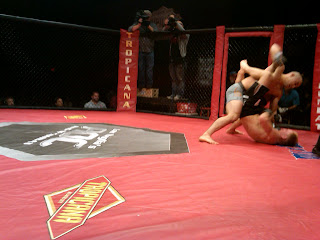