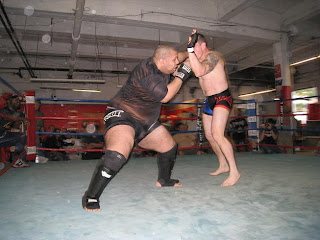 Kimbo Slice is going to face off against Roy Nelson in the Octagon - let the damage control begin!

Fade in to the TUF House, to Kimbo relaxed on a bed and waxing poetic to his teammate Abe Wagner about life, love and facial hair. "My beard is actually named Kimbo, yo," he says. "My real name is Kevin Ferguson, but everyone assumes Kimbo Slice is my alias." He shakes his head, his white Muslim skullcap moving back and forth on his Charlie Brown pillow atop Snoopy bedsheets. "My beard is the one named Kimbo Slice. We're like two different entities. It's even got its own Social Security number. Know what I'm sayin'?"

Abe Wagner looks at the camera and mouths the words "What the fuck?"

Kimbo, this time alone, speaks of existentialism. Of the duality of man. He kneels beside his bed and prays, then talks of the world being his enemy. His "inner me" being the enemy. The world needing an enema. Himself needing an enema. Of Def Leppard's 1987 single "Animal". The world needing rock anthems. Himself worshipping the Egyptian god Anubis.

The cameraman steps in front of the camera, stares into the lens and mouths the words "What the fuck?"

Cut to the housemates ruminating on what a great fight Kimbo vs. Nelson will be, and how it could be on pay-per-view. From behind a closed door Nelson can be heard weeping at paydays lost and all-you-can-eat buffets gone untouched. "Goddamn TUF contract..."

At the TUF training center Team Rashad talks of their great strides with Nelson, and how he at first resisted the infamous "nipple tweak" fans often witness a Greg Jackson-trained fighter doing before he charges into battle. But they've broken down Nelson's barriers, these coaches who know one knows, and now Nelson will tweak his nipples freely and fervently.

Keith Jardine, Coach Rashad Evans' mate from New Mexico, shows up to shake hands and steal gym supplies. Evans greets him with affection, tweaking his nipples and directing him to Quinton Jackson in some misguided attempt at mind games (Jardine lost to Jackson when they fought at UFC 96 - how is that supposed to mess with Jackson?). Regardless, more jovial words are exchanged between the two coaches, soft insults wrapped in smirks and grins, no doubt prompted by Dana White offscreen, who must remind Evans and Jackson daily that they're supposed to generate heat and conflict for this season or else they'll end up with an audience indifferent to their pairing (like last season's Dan Henderson/Michael Bisping escapade). At that point Evans' other mate, Brit James McSweeney, chimes in, but no one understands him and his words are lost.

Back to Kimbo, who is training hard-ish for his upcoming bout. Assistant coach Tiki-Tiki-Head (yes, he's a giant wooden Hawaiian statue of a head - crazy, huh?) instructs the former backyard brawler on the finer points of having bigger men hug you and lie on top of you, and implores Kimbo to "do whatever comes natural." At that, Kimbo - mounted by a teammate - reaches into his waistband and pulls out a handgun. He fires four shots into the teammate's stomach. "Excellent! Great job!" says Tiki-Tiki-Head.

Kimbo's wounded teammate, guts in hand, looks at the camera and mouths the words "What the fuck?"

In a set-up for the next or perhaps future episodes, we're introduced to another ex-NFL player. He likes flowers. Also, his knee hurts. Could he be bow out of the competition to allow someone who lost another chance? Stay tuned!

As Kimbo's perspective has dominated the airtime of this episode, it's time for a little back story on his foe, IFL heavyweight champ Nelson. "My name is Roy Nel-" And then the camera goes back to Kimbo, stating why he believes his beard deserves a Nobel Prize.

Fight time, and Rampage has shaved his head so his hairstyle mimics that of his fighter. Kimbo's beard growls. Nelson, meanwhile, seems a little peeved the cameramen have been swarming around Kimbo like flies on a chocolate cake. Other than Jacob "Stitch" Duran doing a quick sketch with crayons, the rotund Nelson has gotten zero attention.

"I'm so excited for this fight," says Dana White. "On the one hand, Kimbo sucks - like I said when he was fighting for other promotions. But on the other hand, he's the greatest fighter that ever lived. Especially now that he's a UFC employee."

And then it's on. From their corner, Team Rampage shouts vital instructions and advice, like "Knock him out, Kimbo! Knock him out!" or "Knock him out, Kimbo! Knock him out!" But Kimbo ignores them, instead opting to lie on his back with Nelson's gigantic belly in his face, Nelson all the while patting him gently on the head. This goes on well into the second round (as Kimbo is unable to reach the handgun tucked into his waistband with Nelson pinning his arms), and finally referee Herb Dean Jellybean has seen enough. The best, most experienced fighter in the TUF House has won via TKO.

Dana White rises to his feet, applauding. "That was fantastic! Kimbo Slice looked like a warrior, and I can't wait for him to headline a UFC pay-per-view!"

And the entire cast and crew turn to the camera and simultaneously mouth "What the fuck?"
Posted by Jim Genia at 10:18 AM No comments: