How Scary is Cristiane "Cyborg" Santos?

You may recognize her as that tough Chute Boxe representative who wrecked Shayna Baszler and Yoko Takahashi in EliteXC. You may know her as the fighter destined to face Gina Carano in what will be female MMA's biggest marquee match-up yet. But Brazil's Cristiane "Cyborg" Santos, who's slated to execute Hitomi Akano at Strikeforce's April 11th show, is more than that: she's actually one of the most frightening individuals in the sport. So just how scary is Cyborg? 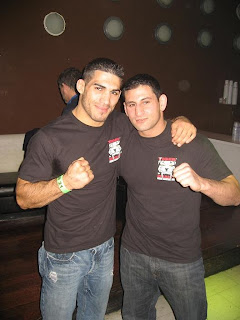 In an exclusive imaginary interview with MMA Journalist, Strikeforce Grandmaster Scott Coker, the man behind the promotion's leap to Showtime and CBS, has revealed that he intends to set up animal vs. animal bouts in addition to regular MMA bouts. An idea once pushed by UFC matchmaker Joe Silva, animal vs. animal bouts have gained little traction among athletic commissions and animal rights organizations. But the fan interest is there - a fact that Coker hopes to exploit to satisfy Strikeforce's suddenly daunting event schedule. Here's an excerpt from that shocking imaginary interview: