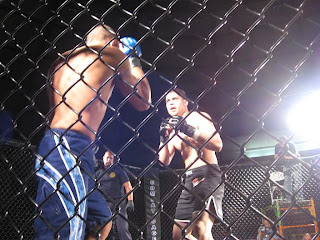 "Hahahahaha!!! I know Rick Huddleston personally, and believe me, he has a LOOOOOOOONG history of ripping people off and being a scumbag loser!!!!!!!!!! He'll never change, just hopefully someone kicks his ass once and for all!!!!" - anonymous poster on "Cease and Desist" article
Posted by Jim Genia at 1:21 PM No comments: 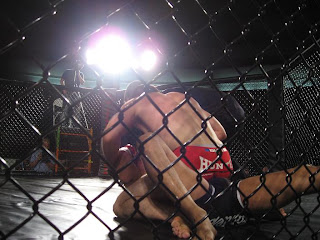 So Team America: World Police is left without a fighter after Dana White has declared Jason Pierce too sad to compete. Poor Jason Pierce. As the Smurf destined to hate everything - including his injured foot, competing, the Octagon, human beings and TUF contracts - his lot in life is a dismal one. His teammates opt to kill him for his inability to muster a positive outlook, so he's weighted down with chains tied to cinderblocks and dropped into the pool.

Dana calls Mark Miller into his lair and asks him if he wants to be a fucking fighter. "My nose hurts," replies Miller. "Plus, I knocked out Josh Neer in the IFL two years ago, so I pretty much peaked then."

So Dana allows Frank Loser to fill in for the irreversibly depressed Jason Pierce, who by now is being picked apart by the hermit crabs that reside in the bottom of the TUF house pool.

Then there's some drama concerning who has to wake up early, with the Queen of England (Dan?) talking so slow a passing tortoise pauses, rears up on its hindclaws and declares, "Damn. Speed it up, will ya?" Apparently the Queen wants Team America: World Police to sleep later, but Team UK coach Michael Bisping doesn't want this whole coaching thing to get in the way of his morning snuggles with Dana White, where the two climb into a single purple Slanket and share a croissant while watching the Today Show. Bisping says no, then suggests that the impending match between Frank Loser and the garble-mouthed David Faulkner settle the issue. None of that flies, so in desperation he viciously attacks the Marquis de Johnson with water squirted from a bottle. The Marquis take 22 hit points of damage and must make a saving throw vs. water bottles, but after the Queen remarks that Bisping is acting like a child and seems to have a thing against royalty, the Brit apologizes. Or something. Who knows. Anyway, Team America: World Police gets to sleep later and Bisping's Slanket sessions with Dana suffer.

And what of that coveted homosexual demographic? What nod to them for this week's episode? It's the gag reflex! David Faulkner still can't keep things in his mouth, so he's sent to a hypnotist. Faulkner narrates in a form of English virtually unspoken since the Battle of Hastings in 1066, peppering his tale with a bunch of words like "ye" and "olde" and "forced to fellate a baguette as a childe" while he's put into some sort of faux-trance by a witch doctor. Is he healed? Doubtful, although he no longer has the urge to smoke and will cluck like a chicken whenever someone says "sandwich".

Then it's fight time, with a dearly departed Mask from Tapout cageside for what turns out to be a sloppy but entertaining war. Throughout the first round the Queen repeats "jab, jab, jab, jab..." until finally referee Moustache Mazzagati has had enough, and when Moustache Mazzagati takes off a shoe and hurls it the Queen, she ducks and hides in the crawl-space beneath the Octagon. Faulkner ends up getting the best of his American foe, but in Round 2 Frank Loser takes control, battering the Brit and sapping him of all his energy. The bell rings and it's expected that a third round is needed. Faulkner ain't having it.

"Don't do this," implores Bisping. "You'll regret this forever."

But Faulkner won't budge, repeatedly stating that he enjoyed himself. Interesting. Well, glad you enjoyed yourself, buddy. Why don't you sit back and relax? Can I get you a Sprite or something?

The fight is waved off and Frank Loser is now Frank Winner after forcing Team UK's alleged best fighter to quit. The end.
Posted by Jim Genia at 11:28 AM 1 comment: 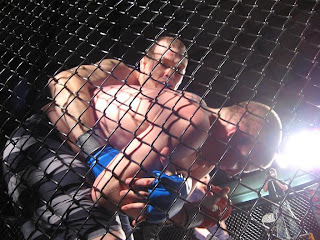