Thanks to Quinton Jackson, the injuries suffered to the door in the TUF training center are grave. Shattered, splintered, broken, barely hanging from its hinges... the door is now out of the running to become this season's Ultimate Fighter. Alas, perhaps matchmaker Joe Silva will find a place for it on a UFC Fight Night undercard once it's healed up.

"I'm sorry," says Dana White to the door, which is being treated by medical staff. "A door has never won on the show before. I know you probably thought you'd be the first, but fighting ain't easy." The door says nothing, but its demeanor - sad, stricken - speaks volumes. "You'll be back," says Dana, and when the door leaves to go to the hospital, the UFC honcho looks at the camera. "The kid's got heart. You have to admire that."

His defeat over the door notwithstanding, things look grim for coach Jackson, whose team is now down seven bouts to none in the overall scheme of things. The remaining opening round fight will pit ex-NFLer Marcus Jones against Team Rashad's Mitch Weasel, and though Jones is inhumanly huge, he's still a member of Team Rampage, and they all suck. Will coach Evans and his boys score a clean sweep? Will Kimbo fight again? Will TUF ever be interesting again if Kimbo doesn't somehow play a bigger role?

It's time to get to know Marcus Jones and Mitch Weasel. Marcus apparently loves opera and sings a halfway decent soprano, pitching perfect high notes when he belts out a duet with some sort of giant desert insect that creeps into the house. Laaaaaaaaa! And smash! go the champagne glasses in the cupboard. Marcus follows it up with an effiminate dance.

Mitch Weasel, meanwhile, likes to sob. Also, his wife has cancer. Wait, are we supposed to feel sorry for you for being apart from her? Or are we supposed to think you're a douchebag for leaving your dying wife's side for a freakin' TV show? I'm confused.

Back to coach Jackson at the TUF center, trying to molest that poor fighter with the man-boobs. "Titties!" cries Jackson. "Oh, okay," says Darrill Spoonodor. "Squeeze them all you want." And the gropefest continues!

Uh oh, someone drew a picture of Marcus Jones and Mitch Weasel wrote mean things on it, and look, they taped it up on the wall of the TUF house. Hijinks! This is worse than jizzing on someone's food or urinating on someone's pillow! Oh, the humanity. When will this vicious cycle end? "I'm going to rip the arm off of whoever did that," promises Marcus.

Then it's fight time, and sure enough, when Marcus catches Mitch Weasel in an armbar he rips the poor man's arm off.

Postfight and it's the traditional "interview the fighters at that tree behind the TUF center" moment. With only one remaining arm, Mitch Weasel sobs. "My wife... cancer... my arm... boohooo."

Marcus, of course, is more upbeat. "Laaaaaa!" And he's joined by a giant termite singing baritone and a scorpion singing tenor. It sounds like "La Traviata".

And now, the moment we've all been waiting for (okay, not really. That moment passed when Kimbo lost.): the next round match-ups. Dana gathers coaches Evans and Jackson and they listen to the remaining competitors spew about who they want to fight and what not. Most say Matt Minestrone - because everyone hates Italian soups - but when Roy Nelson speaks Dana interrupts him.

"I hate you for defeating our golden goose," says Dana to the IFL champ. "How dare you diminish the value of our money-making, ratings-magnet spectacle."

"If I could somehow swing it, you'd be facing Cain Velasquez, Shane Carwin and Cheick Kongo all at once for your next fight," mutters Dana.

"These cameras are rolling," a producer says from off-screen.

Dana's visage switches from venomous scowl to his usual cavalier self. "You're fighting Justin Wren!" And the rest of the pairings fall into place, with Jon Madsen taking on Brandon Cottonswab, Matt Minestrone going up against James "Team UK Foreva" McSweeney, and Marcus Jones facing Darrill Spoonodor.

What of Kimbo? The camera pulls back, away from the mat where the announcements are made, away from the exercise equipment and the cage, to the door frame where once hung the now-injured door. In its place: the man with the beard, Mr. Slice himself. The season is saved! 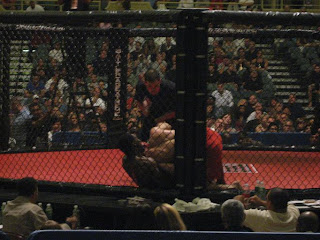