Free UFC 95 Card Worth Every Penny

This Saturday is UFC 95, another magnum opus from London, England broadcast for free on SpikeTV, and based on the line-up alone, this baby will clearly be worth every penny. In the main event, Diego Sanchez will pit his top-level submission skills against those of Joe "Worst Jiu-Jitsu Ever" Stevenson in what promises to a barn-burner (that is, a barn that you're currently living in, and when it catches fire all the animals panic and trample your stuff as you make your escape). In the co-main event... heck, I can't even tell which bout is the co-main event. They're all so worthy of that title! Josh Koscheck is fighting no one of importance, Rory "I've Only Fought in the UFC Once" Markham is taking on one of the Hardy Boys (I think it's the one with the long hair that fooled around with Nancy Drew on that class picnic), and Wilson Gouveia and Nate Marquardt are set to clash in a donnybrook that should determine who gets to eat at Applebee's for the next month and who's stuck eating ramen noodles. And the under card... wow. Just wow. The mere thought of fighters I've never heard of, like Stefan Struve and Evan Dunham and Brian Cobb, getting a crack at their share of Octagon glory... I'm so excited about it I can barely think straight. Hey, I know this UFC is free, but is there someplace I could just mail a check to? I'm going to feel like I'm robbing Zuffa on Saturday, and I don't know if I can live with that.
Posted by Jim Genia at 4:59 PM No comments: 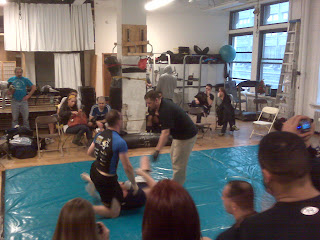 UFC 97 in Montreal Still On But With Key Concessions

Canadian newspaper La Grande Merde is reporting that an agreement has been reached between UFC brass and the Quebec athletic commission, and that UFC 97 on April 18th will go on as planned - albeit, with some key concessions. The event was in jeopardy thanks to Stephane Patry's Strike Box debacle and the commission subsequently wanting to ban knees and elbow strikes, but after emissaries from Zuffa were dispatched to salvage the situation, things have apparently been ironed out and the show will go on. The concessions the UFC had to agree to are: 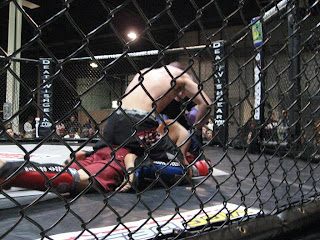 This Saturday the Ultimate Warrior Challenge returns to the Patriot Center in Virginia, and the event is headlined by Mike Easton - perhaps the best MMA fighter to ever come from the Nation's capital - taking on former WEC champ Chase Beebe. It'll be Easton's toughest test to date, but with his ultra-deadly striking and sharp-as-hell grappling, he should be ready. And as usual, he will be wearing his Speedos. Maybe even less. "I want to show my fans the best of me," said the Lloyd Irvin-trained phenom, who's knocked out opponents in Brazil while wearing hardly anything and won hard-fought wars in the States in practically just his birthday suit. Pending approval from the Virginia Boxing & Wrestling Commission, Easton may even wear only a thong this Saturday, although for now it's too soon to know for sure. "I've got more to offer than Chase," said Easton. "A lot more. You'll see. Everyone will see." The UWC's "Man 'O' War" event will also see local bruiser Antwain Britt taking on Team Renzo Gracie jiu-jitsu stud Jamal Patterson, a whole bunch of lesser known dudes fighting each other, plus a battle between two chicks I've never even heard of. MMA Journalist's Adam Butterworth should be on hand to capture the magic.
Posted by Jim Genia at 10:13 AM No comments: 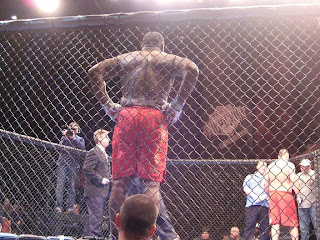 Ring of Combat 23 is this Friday night at the Tropicana Casino & Resort in Atlantic City. Woot! Anyway, the 14-bout card features some seriously intriguing match-ups so MMA Journalist has a compiled a list because... because... well, because that's what I do. 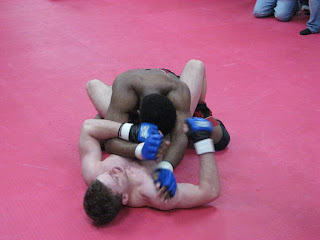