Heh, remember this series that I started like two months ago?  Well, if not, it's a self-explanatory concept.  Anyway, I've been sitting on this interview with Kenny Rivera for a while, waiting for the right time to transcribe and publish it, and since he's going to be fighting at Locked in the Cage in Philadelphia on October 6, I guess the time is now.

The details on Rivera are that he's the father of twin boys and works full-time doing engineer-type stuff, he's built like a 145-pound action figure, he's smooth on the ground but better at sprawling and brawling, and in five years he's fought in just about every amateur MMA outlet there is in the Northeast (and won belts in quite a few of them).  The 24-year-old Queens resident has even trekked to Florida and Virginia for fights, and has amassed a sizeable 18-7-1 record. 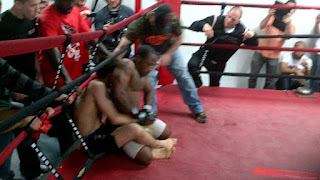 Why travel so far for fights?  "The reason I traveled is because New Jersey's rules limited me," he says.  "I felt very, very handicapped by the rules.  I fought in Asylum Fight League, I fought in Newbreen [Fighters], I fought in Evolution [MMA], and I felt very handicapped.  I'm a better fighter, but I wasn't able to use my whole arsenal.  So Virginia, Philadelphia, Florida - their rules are pro rules.  There's kicking to the head and ground and pound, and those are the tools I want to use, and when I go pro, there won't be anything new." 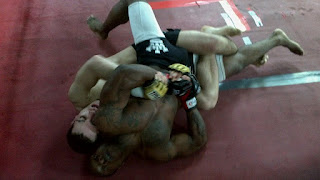 Just a few months ago, Rivera became only the second person to become a UCL champ (after a three-round war with jiu-jitsu brown belt Chad Hernandez), and then he announced that he was turning pro - hence the LITC fight in October.  How important is it to him to fight in his home state?  Well, it would damn sure be a lot more convenient.

"I drove seven hours to fight in Virginia and I beat the guy in like a minute and twenty seconds.  It's pretty funny, but it sucks.  And then I had to drive back home for seven hours.  No partying, no nothing.  I didn't know anybody there.  I couldn't sell tickets, so I'm actually losing money because promoters won't pay for hotels or gas or whatever.  In the long run, I'm losing money - but I'm gaining experience."

What's Rivera's proudest moment in the cage thus far?  "There are a lot of fights where I've had one-minute fights and thirty-second fights, and those are not my proudest.  My proudest moment was probably winning the Evolution [MMA] title.  It was against Piotr Andrejko - a Russian guy.  Very, very strong guy.  He was actually the strongest opponent I had ever faced.  The fight went all three rounds and I did what I had to do.  And after that fight, I cried.  I actually cried.  It felt so awesome.  Even though it was amateur, I felt the effects of the crowd and all my friends there to support me - it made everything so right."

So if you're keeping score, Rivera was a champ for Asylum, Evolution and the UCL.  I think the odds are good that once he gets accustomed to the waters in the pro MMA pool, he'll be fighting for more belts in no time. 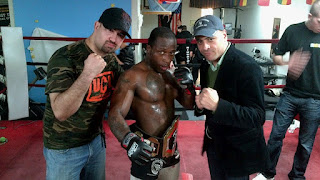 Here's a link to the article I did on shadowing NJSACB inspector Vincent Dudley at that CFFC show a couple weekends ago.  Big thanks to Nick Lembo for making it happen.
Posted by Jim Genia at 4:23 PM No comments: