Assemblyman Dean Murray arrived with his chief of staff, and Murray was the voice of optimism.  "This is the year," he said.  "If we're going to do it, it's going to be this year."  He went on to talk about how attitudes toward the sport have shifted among other Assembly members (shifted positively), and he played down the impact of Governor Cuomo's budget proposal (and its lack of MMA legislation), stating that what the governor submitted was merely a proposal and a wealth of budget hearings and discussions awaited it.  Other points he brought up: how packaging is important in terms of the rally scheduled for February 8 (i.e., no riots, please), how effective (or ineffective) the revenue-generation argument truly is, and the underground show scourge that must be regulated into oblivion.  Was there Kool-Aid being dispensed?  I don't think so, but I'll drink anything when it comes to MMA, so maybe I'm not the best person to judge.  It was, however, a worthwhile roundtable.  Props to Sambo Steve for putting it together.

MMA Journalist is here at Sambo Steve's school in Midtown Manhattan for an MMA legalization roundtable. The discussion is (of course) centered around the issues pertinent to getting sanctioned in New York, and the participants include gym owners Sambo Steve, Steve Katz and Steve Kardian, journos Eddie Goldman, Justin Klein, Bruce Kivo and Pete Lampasona, insider Paula Romero, and a rep from State Senator Lee Zeldin's office. In light of recent legislative events, Lampasona is advocating the "V for Vendetta" mode of attack, but calmer folks are talking him back from the ledge and disassembling his pipe bombs. Other topics discussed include educating the public on the safety of the sport and its utility, and countering negative propaganda and rhetoric.
Posted by Jim Genia at 12:31 PM No comments: 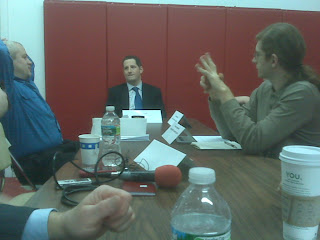 Sent from my BlackBerry® smartphone with SprintSpeed
Posted by Jim Genia at 12:24 PM No comments: 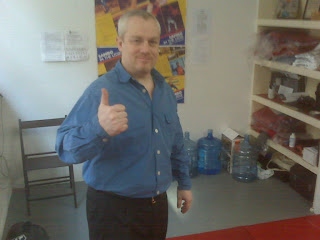 Sent from my BlackBerry® smartphone with SprintSpeed
Posted by Jim Genia at 12:18 PM No comments: 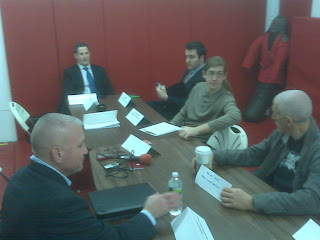 Sent from my BlackBerry® smartphone with SprintSpeed
Posted by Jim Genia at 12:15 PM No comments: