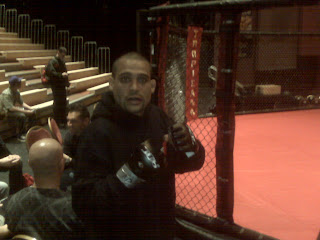 Epic End to an Epic Saga

Last night Christian "Wargod" Darrow showed up at James Funaro's gym on Long Island for the bout that was supposed to happen at the UCL, and the result was a predictable KO for Funaro.  By all accounts, and his own admission, Darrow has a drug problem and witnesses say it was evident.  But credit should go to both men - for Darrow, who knew going in that he was going to take a beating, and for Funaro for showing class and restraint.  According to Anil Melwani over at www.MMA.us, as soon as his opponent dropped Funaro was immediately helping him up.  For an incredibly hyped challenge match, one on par with the legendary Kimbo vs. Gannon or Hermes Franca vs. Manny Reyes bouts, there was no bad blood whatsoever.  It was all just business.  Serious, Internet business.  Check out Anil's site for pics.