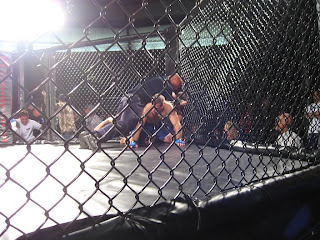 From the Mailbag re: Should Dana White Go for MMA to Grow?

From the mailbag: "Yo dogg, you crazy. my boy Dana knows whats up. he benn makin all the right moves to get evything where it is. He needs to stay and YOU NEED TO GO!!!1" - Newarkninja83

Thanks for the kind words, Newarkninja83. And I use the word "words" very, very loosely.
Posted by Jim Genia at 2:32 PM No comments: 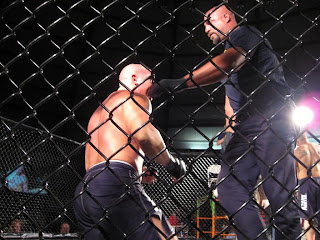 Things That Won't Happen at UFC 98

UFC 98 is Saturday night at the MGM Grand Garden Arena in Las Vegas, with light-heavyweight champ Rashad Evans defending his belt against Lyoto "Bruce Leroy" Machida, and Matt Hughes and Matt Serra finally meeting in a co-main event heralded as a grudge match but more akin to "Oh Jeez, Just Get the Damn Fight Over With" bout. Anyhoo, here's a list of things that won't happen at UFC 98: