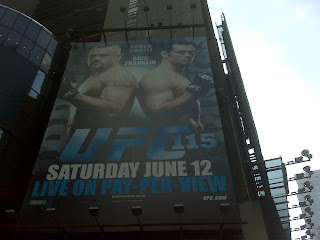 Sent from my BlackBerry® smartphone with SprintSpeed
Posted by Jim Genia at 5:14 PM No comments:

Heart.  From the Latin word heartus, which means "mushy, red thing that makes sounds in your chest".  Except for robots and cartoon characters, everyone possesses one.  But not everyone has that thing known as heart, which is an ethereal thing and not at all mushy and indicative of large cojones and the desire to succeed.  In this episode, we do not see any gory scenes of surgery on someone's aorta or left ventricle, nor do we see anything pertaining to that 1970s rock band fronted by those two chicks.  We do, however, see some heart.  Or, more accurately, lack thereof.  But first!

Coach Chuck Liddell is still angry.  But about 60 seconds have transpired since Dana White first told him that Tito Ortiz is out of their proposed fight, and the Mohawked One goes from kicking a couch and cursing at the house plant to puttering around confused and lost.  His rage fizzles out.  "Dana, I forgot why I was mad," he says sheepishly.

"Tito backed out of your fight," says White.

"Frickin' Tito!" screams Liddell, and he overturns a footrest.  "I knew it!  I knew…" He pauses, stares blankly at the giant posters on the wall of the TUF Training Center office, posters of Ken Shamrock, Brock Lesnar, BJ Penn, Lorenzo Fertitta, Keith Kizer and the creepy chick who makes sure all the fighters are wearing the right size athletic supporter.  "Uh, Dana?  Tito who?"

"Goddamn Tito Ortiz!" wails Liddell, and he punches at a nearby inflatable Jens Pulver blow-up doll, striking it squarely on the face.  It sails into a wall, bounces off, and returns to bop him in the head.  The ex-light-heavyweight champ falls to the floor, unconscious.

Cut to the pre-fight hype of the impending Cypress Hill/someone named Josh who could really be any one of the other million nameless guys on TUF in the show's eleventy-billion seasons.  Cypress Hill's in his bed, muttering about game plans ("Sawed-off shotgun, hand on the pump, left hand on the forty - puffin' onna blunt").  Meanwhile, Josh retreats to a dark corner of the basement.  Occasionally an ant or other small bug skitters across the floor, only to be met by his outstretched hand, and then his mouth as he eats them.

And then they're fighting!  Pow!  Bang!  Zoom!  Cypress Hill is big and colorful and looks like a poster boy for affirmative action or diversity in the workplace, and he fires off jumping-spinning-crescent kicks and flying back-kicks and does his best imitation of 1974 Blacksploitation star "Black Belt Jones".  Josh just punches him in the face.  And wrestles him.  And punches him in the face.  This goes on for two rounds, the battle waged a true essence of "back and forth", and by the end of the second frame Cypress Hill is under his foe and eating forearms.  The bell rings.  The judges declare that there will be another round.

Ha!  Phooey on them.

You see, there's heart and there's heart, and though Cypress Hill has the first, he clearly does not have the latter.  Huffing and puffing on his stool, he's a broken man, unable to cope with the violence.  An MMA fight is a harsh mistress, demanding of blood and pain in exchange for but a moment of glory, and not all are keen to pay.  Referee Moustache Mazzagatti asks Cypress Hill if he's ready to continue.  Cypress Hill shakes his head.  "I ain't going out like that, I ain't going out like that."  And the man who looked impressive with his big hair and dangerous striking quits on his stool.

Ortiz, who's Cypress Hill's coach, storms off in a cloud of anger, and when the young fighter is fitted with a neck brace and stuffed into a waiting ambulance, the Huntington Beach Bad Boy pelts the vehicle from afar with old cabbages.

But it's time for Ortiz, the show's other ex-light-heavyweight champ, to face the music.  You see, his neck needs new vertebrae (or something), and because Ortiz has declared that he cannot fight, a giant monkey wrench has been thrown into the whole TUF-coaches-must-fight-each-other thing.  With a serious look on his face, White beckons for Ortiz to join him in his office.

"Tito, you need to have your neck amputated so I've arranged for you to meet with the best doctor in the country for that," says White.  "He's in Los Angeles.  And your appointment is in 15 minutes.  Don't let the door of the TUF Center hit you in the ass when you leave this very instant."

Ortiz is shocked, dumbfounded, stunned.  He opens his mouth to speak, but White cuts him off.

"What are you still doing here?  Disappear, fool!"

So Ortiz skedaddles, collecting as much office supplies and food from the refrigerator that he can carry.  A moment later and he's roaring off in his black SUV.

His unwitting Team Ortiz wards watch the exit from the confines of their little yellow short bus.

Dumb as a Bag of Hammers scratches his head.  "Fellas, I - I think something's up."

And then White breaks it to them: he's fired their coach.  Just like the classic Bill Murray film "Stripes", they're going to have to finish their training themselves.

Back at the TUF House and Ortiz's team has a sad.  They can't believe Ortiz is gone, and they especially can't believe that he left without saying goodbye.

"God, what a douche," says Bag of Hammers, and he kicks his teddy bear and plops down on the couch, arms folded defiantly.

But who enters the house just then?  Why, it's Ortiz, who's come to give his boys some parting words and hugs and handshakes.  Bag of Hammers jumps to his feet with tears in his eyes.  "Dad!  I knew you'd come back!  I knew it!  I knew it!"

Meanwhile, assistant coaches Saul Soliz and Razor Rob begin removing appliances, carting out the dishwasher, then the washing machine, then the dryer.

It's a fitting goodbye.  You see, in his long and illustrious career in the Octagon, Ortiz has proven time and time again that he has heart, so him declaring that his broken spine is too risky to fight with is just a warrior being smart.  Also, it's like the only infusion of "interesting" that this season has gotten, so of course it's all good in the 'hood.

It's the next day, and the TUFers are back at the gym, gathered around White for the last fighter-match-up announcement.  The Amish Kid will be facing Hawaii Five-O and Ronnie Kray will fight Josh.

The guys are non-plussed.  Liddell, however, is left scratching his head.  He tugs on White's sleeve and gestures for the UFC president to join him off to the side.