The UFC has announced more bouts lacking superstar Eddie Alvarez for their UFC 101 Philadelphia grand affair slated for August 8th. In addition to the previously mentioned pairing of non-Philly natives BJ Penn and Kenny Florian, out-of-stater Forrest Griffin will be taking on middleweight champ and foreigner Anderson Silva in a light-heavyweight bout, and Virginia-based Amir Sadollah will face someone not named Eddie Alvarez. In a nod to Northeast MMA fans, Ricardo Almeida, Kurt Pellegrino, John Howard and Tamdan McCrory are also on the card. Meanwhile, it's questionable whether or not the most successful mixed martial artist Philadelphia has ever produced (Eddie Alvarez) will even be in the Wachovia Center that night. Said a spokesman for the UFC, "Please. Leave me alone."
Posted by Jim Genia at 3:59 PM No comments: 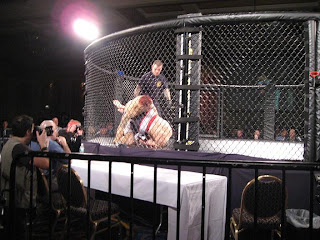 Last night's episode is all about the dichotomy of disparate warriors riding into combat, each armed with varied skills and attitudes and each capable of winning or losing in their very own ways. Also, there's teeth.

The British Mr. T - still sulking from his defeat at the hands of the Marquis de Johnson - is taken aside by coach Michael Bisping, and Bisping apologizes for missing his fight. He weaves together some sort of excuse with threads containing the words "jetlag", "inexcusable" and "fell asleep in Dana White's hot tub amidst empty bottles of Boone's Farm and half-eaten Ring Dings, drunk on passion and love". But we know the truth. *Wink wink, nudge nudge.*

Then the next fight is announced. Is it me or is everything moving at breakneck speed? Anyway, Cameron Dollar-Dollar-Bill-Y'All prances around in a tutu and waves a wand fashioned out of toothbrushes, yet for all his carefree attitude and frolicky-ness, he confesses to be really, really scared of fighting. Sensing this like an underfed Rottweiller or PMS-suffering bobcat senses fear, Bisping announces that Cameron Dollar-Dollar-Bill-Y'All will be facing Sir Edmund Stapler, the inventor of the common office stapler. The Team America: World Police rep gulps, starts sweating profusely, and can be heard uttering "Mommy..." under his breath.

Back at the TUF house, Cameron Dollar-Dollar-Bill-Y'All builds a fort in the living room out of sheets, blankets and pillows and forbids entry to anyone with a British accent. Gone is showtune-singing lad from Not Gay, California. Instead, we see a man very much like Shaggy and Scooby-Doo after a swamp monster has taken a seat behind them in the movie theater and hissed the words "Down in front." At the gym, the Queen of England (or Dan - anyone know why?) says his ward can win if he sticks to his game plan of talking real slow and appearing to have no concerns whatsoever over anything - not fighting, not anything. "But my stand-up is terrible," says Cameron Dollar-Dollar-Bill-Y'All, and he demonstrates his terribleness by throwing pixie dust at some focus mitts and missing. "I'm going to die," he says. Meanwhile, the Queen of England lies down in a corner of the gym and doesn't move, and eventually wild animals like jackrabbits and lizards make nests on his still form.

But Cameron Dollar-Dollar-Bill-Y'All doesn't die when he gets into the cage with Sir Edmund Stapler. No, he throws the Brit down and chokes him out with ease. And then the next fight is announced (whoa, slow down SpikeTV. Do you have somewhere else you want to be? What happened to us savoring these episodes?), with Team America: World Police fighter Frank Loser taking on Some Brit Who Lives in California Because Weed is Legal There.

Frank Loser is the exact opposite of Cameron Dollar-Dollar-Bill-Y'All in that he dresses more masculine and stomps around declaring his need for violence and his eagerness to punch people in the face. A teammate with a grudge against teeth offers Frank Loser a $100 bounty on any dislodged toofs he brings back to the house. Keeping in line with the way the show has been going lately, the backstory we get on these guys encompasses pretty much just what they had for breakfast (Frank Loser has a bagel; Some Brit Who Lives in California Because Weed is Legal There has a bowl of Wheatabix). Then they're fighting.

For all his tough talk and aggression, Frank Loser comes out swinging and is quickly the absorber of a beating. Round 1 ends with the American sporting a Grand Canyon-like gap in his grill and teeth stuck in his mouthpiece, and soon into Round 2 the Brit is tapping him out with an armbar. Back in the locker room, Frank Loser remembers the $100 bounty and spits out more teeth, thereby coming away from the defeat richer by 500 bucks. Good for him.
Posted by Jim Genia at 2:26 PM No comments: 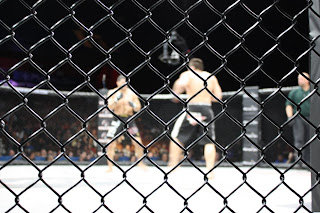