The "MMA in New York" Press Conference in a Nutshell

"We don't know anything but let's meet once a month and figure out the answers." Host Keith Creed, I applaud your effort.
Posted by Jim Genia at 9:28 PM No comments: 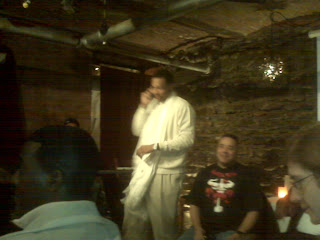 Sent from my BlackBerry® smartphone with SprintSpeed
Posted by Jim Genia at 7:02 PM No comments: 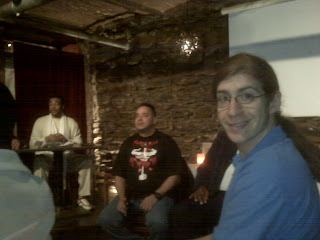 Sent from my BlackBerry® smartphone with SprintSpeed
Posted by Jim Genia at 7:01 PM No comments:

The quarterfinal match-ups are upon us, and by now, after so many weeks in the TUF House and so many training sessions and so many fights, everyone knows everything about everyone else.  For instance, it's no secret Dr. Watson likes to solve crimes.  And all are well aware that Jeremiah Johnson Lentz is running a meth lab in the backroom of the TUF Gym and that Andy My Main Man is a part-time pimp.  Also not a secret: Jonathan is some kind of non-human creature (a white-ish Na'vi?) who favors the rear naked choke, and Armenians are a sucker for a good rear naked choke.

Which is problematic for Armenian Fighter Wannabe #34, who must face Jonathan in unarmed combat.

"That's sound advice," says coach Josh Kosh B'Gosh later on.  "Seriously, just avoid giving up your back altogether.  In fact, if you can somehow keep your back pressed up against the cage  - like, immediately, the second the referee says "go" - you should be able to stay out of trouble."

Jonathan, meanwhile, likes to sit out in the yard and commune with nature.  Or stay away from humans.  Who knows.

"Everyone in the house thinks they're in the UFC," he says, his tail twitching behind him.  "But we're not.  They are on Terra, which is what you homo sapiens call Earth."

It's almost fight time, but before then, we're treated to Georges St. What The Heck Is He Saying? talking about either a) new coaching methodologies; b) giraffes; c) gibberish and how it's an effective way of speaking.  Either way, we get to see him dance around, gesticulate like a lunatic and maul English words like a rabid pitbull that chomps on Schoolhouse Rock cartoon characters.  At this stage in the game, you can't hold it against the Canadian for subjecting us to his incoherent diatribes.  You can only resent the SpikeTV execs for putting the man before the camera in the first place.

And then Armenian Fighter Wannabe #34 and Jonathan are in the Octagon mixing it up.  Actually, they're not mixing up so much as they're re-enacting Jonathan's other TUF 12 bout with the Armenian Wonder.  Takedown, back-control, rear naked choke, tap.  Seriously, when it comes to falling for that submission, it has to be a genetic predisposition or something.

Next up, Banh Mi versus Spuds McKenzie - a match-up that pits a laid-back and kindly Vietnamese kid who used to sell Ecstasy against a weird dude who talks like he's mentally disabled.  Spuds McKenzie has won 50 or so fights via guillotine (including one over Marky-Marc), so like with Armenian Fighter Wannabe #34, the advice just keeps rolling in.

Later, in the TUF House kitchen, Banh Mi and Spuds McKenzie are talking, cordially discussing things like how they usually fight and how they win.

"Really?" says Banh Mi.  "I think I might have heard something about that."

And bang, it's fight time again.  Spuds McKenzie does not go for the guillotine, as at no time does Banh Mi duck his head and shoot for a takedown; instead, the taller fighter presses the Vietnamese kid against the fence and punishes him.  Though widely renown as an inferior fighter, Spuds McKenzie takes the round.  However, all those quick wins via submission did his cardio no favors, and he has nothing in his tank for Round 2.  Banh Mi promptly punches him in the gut and TKOs him.

Afterwards, Spuds McKenzie is despondent about tasting loss for the first time in his career.