It's time for the main event, which pits Macaco against some dude from Virginia named Beau Baker. So far no Brazilian has lost, but the danger of a riot still lingers, and if the crowd doesn't like the outcome of this one... Well, tell my wife I loved her, and tell her to give my Shabazz Fruit Cola to our daughter. Round 1 is pretty back and forth, with Baker surviving some bad positions and showing a lot of toughness, but Round 2 is all Macaco working from top position. In Round 3 Macaco's age seems to be showing as he slows considerably. However, his experience and technical ability shine through in the little things he does to stay out of trouble (i.e. grabbing his opponent's head and pulling down when Baker gets behind him). The last minute sees the two men throwing bolos, and when time runs out the unanimous decision is awarded to Macaco. That's all, folks.
Posted by Jim Genia at 10:06 PM No comments:

Jay Silva and Plinio Cruz are coming to the cage. Silva is a local guy who trains out on the West Coast, or a West Coaster who trains out here. Who knows. All I can tell you is that he's got Emerson Souza and Rob Guarino in his corner. Cruz is known in Rio de Janeiro for his love of Shabazz Fruit Cola. Can you guess who the crowd is rooting for? Silva and Cruz engage in a kickboxing battle in the opening round, and when Cruz starts trying to take it to the ground, Silva manages to avoid his subs, out-scramble him, and punish him with a jab. This one goes the distance as well, and when time runs out Silva is raining down leather from within the Brazilian's guard. The split decision goes to Cruz, but Silva should've gotten the nod. He scored more and scored more effectively. Next up: Bill Hill from Illinois against Flavio Alvaro from the island nation of Shabazz Fruit Colastan. At stake is the coveted Shabazz Cup. Who wants that precious trophy more? Based on Round 1, I'd say Hill, who uses far superior wrestling to beat the stuffing out of his opponent. Round 2 begins with Hill confident enough to trade - which proves his undoing, as Alvaro tags him on the chin with a right hook that knocks him out cold 46 seconds in. Alvaro earns the Shabazz Fruit Cola "Knockout of the Night" award.
Posted by Jim Genia at 9:18 PM No comments:

Next up is Valter Roberto against Lamont Lister. I'm just about out of Brazilian stereotypes, so I'll just describe Roberto as an experienced middleweight with a jiu-jitsu background. Lister... Well, Lister is a scrapper. Again, the crowd is going nuts over Roberto. God help us if one of these Brazilians loses tonight. Anyway, Round 1 has Roberto pounding Lister for most of the period, although Lister gets some payback late. Things play out in similar fashion in Rounds 2 and 3, with the amount of damage Lister inflicts increasing exponentially until Roberto can barely stand when the final bell tolls. The split decision goes to Roberto, but this one was really close. And now, a word from our sponsor. After a long day at the office, nothing relaxes me more than a bath in Shabazz Fruit Cola. Shabazz Fruit Cola - it's better than Valium!
Posted by Jim Genia at 8:45 PM No comments:

Production values look pretty high, with extra lighting surrounding the cage, a live Internet broadcast and veteran promoter Ed Hsu on the mic as one of the commentators. I'd also like to add that the event is sponsored by Shabazz Fruit Cola. Try Shabazz Fruit Cola, for all your fruit cola needs. Things are about to get underway. The Garv is in the cage asking for a ten-count moment of silence for Helio Gracie. Anthony Montanaro vs. Marcus Rodrigues is up first, with Montanaro hailing from Pitts Penn and Rodrigues fresh from the favela and full of Portuguese curse words. Wowsers, Montanaro is looking awesome in there, confounding the Brazilian's takedowns, stunning him with knees and peppering him with punches. Round 1 ends with Rodrigues on top though, and Rodrigues gets him down early in the second and pounds on him for the duration. Round 3 is all stand-up, with both men scoring sporadically and both men kicking each other in the groin. The unanimous decision is awarded to Rodrigues when time runs out. Man, you've got to love this raucous Brazilian crowd. They're turning what would normally be a moderate fight card into an impassioned night of combat.
Posted by Jim Genia at 7:29 PM No comments:

MMA Journalist is cageside for Karriem Abdallah Productions' "Return of Macaco", a Brazilian-heavy five-bout card at Essex County College in Newark. As the title implies, the event is headlined by vale tudo legend Jorge "Macaco" Patino. Don't know who that is? Google "old school badass" and you'll see this dude has had some epics in the ring. Apparently Macaco lives and teaches in Newark now - hence the four other Sao Paulo natives on the card (think: fighting exchange program). Also fighting tonight are tough Garden State lightweight Anthony Montanaro, Philly scrapper Lamont Lister, and Jay Silva. Absent is heavyweight behemoth Bryan Vetell, who, for some reason, bailed on the weigh-ins.
Posted by Jim Genia at 7:14 PM No comments: 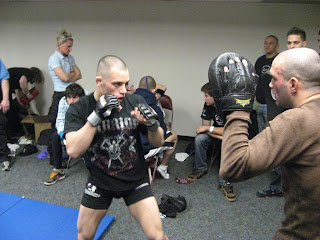 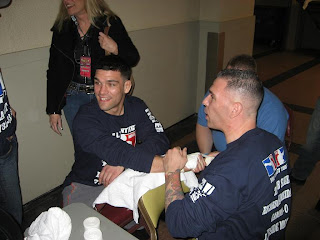 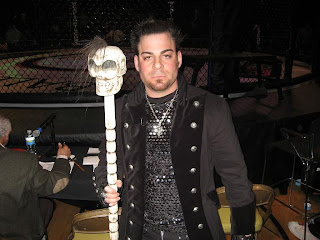 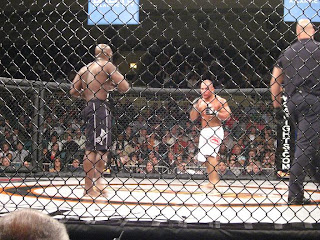