Looks like UFC vet Clay Guida and WEC champ Jamie Varner were in attendance, and Mike Easton wore Chase Beebe like a sweater. Credit goes to Jake Blanton for the outstanding pics. 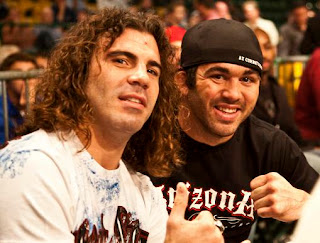 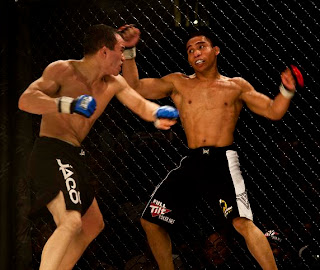 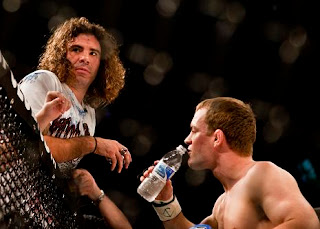 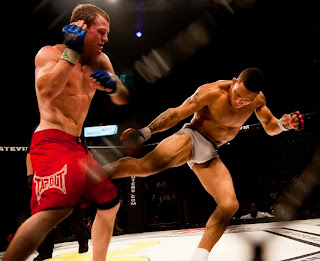 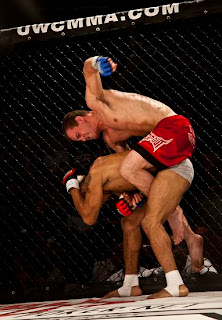 Intrepid reporter Adam Butterworth and ace photog Jake Blanton were on hand to cover Saturday night's UWC 7 in Fairfax, Virginia. How badly was Chase Beebe robbed? Which fight was the best? Can the Virginia athletic commission ever be trusted again? Here's what Adam had to say: "The best card ever at the UWC produced some great fights, devastating knockouts, some close decisions, and one decision I wouldn't even call questionable - it was comical.

Speed knockout of the night goes to the ever-improving Kris 'Savage' McCray, who ended previously undefeated Igor Almeida's night in 49 seconds with a brutal mix of stand-up and wrestling. Yes, a lot of skills showed in a short time frame. Another devastating knockout was delivered by Kyle 'I need another nickname besides Alley Cat' Baker, who devastated a tough, heavy-handed Tommy Truex with body shots. 'Balboa' is a much better nickname in my opinion - just look at his face and the way he fights. He chops his victims down like Rocky and I think I may have heard him cry 'Adrian' after the fight. I can't wait to watch him fight again.

Ryan 'The Rhino' Sturdy sure lived up to his last name but never should have been sent out for Round 3 as Timothy 'Rashad' Woods took him to Poundtown for two rounds and he could barely walk due to 14,754 brutal leg kicks. Woods is a monster and could have finished the fight earlier, but appeared to respect the Rhino's power and stayed at range. 'Tick Tock' McClintock has serious skills and totally outclassed the other (also very tough) Baker brother.

Not worth noting are the judges, who were either 1) drunk, 2) paid off, 3) bitter at Chase Beebe for skipping his last fight at the 11th hour, or 4) bitter at Chase Beebe for showing his ass crack all night. Easton fought hard as always, landed some nice kicks and a few punches, but spent 15 minutes with a world-class wrestler on his back. I don't think choke-out-avoidance wins a title match.

Fight of the night was Dodson versus Runez. Dodson is one of the most entertaining and skilled fighters in the sport. And while he often brings on boos for dancing around the ring, his footwork is amazing. Runez, after getting caught and nearly finished, showed some tremendous conditioning and won the last three rounds. I was exhausted simply watching this fight - these guys never stopped.

Reported crowd was under 5,000, which I think is the second largest for the UWC at the Patriot Center. With more cards like this, the crowds should keep getting bigger."
Posted by Jim Genia at 4:44 PM No comments: 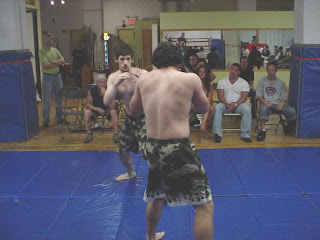 Karriem Abdallah, the man behind KAPMMA, has announced another installment in his amateur championship series. The date is December 18th and the venue is Essex County College in Newark, and if the idea of checking out some amateur MMA bouts isn't enough of an enticement, then maybe the promised "kung fu vs. karate" superfight is enough to rope you in. Novell Bell, aka "the Black Taoist", will be repping the kung fu half of the equation, with Sensei Mo representing the karate half. I have no idea who Sensei Mo is, but Bell appeared on the ill-fated BET show "The Iron Ring" as some sort of guest instructor. Does he truly possess the right traditional martial arts techniques to foil those moves that might occur in an MMA bout? Can he stop a takedown with his chi? Or will he and Sensei Mo just start busting out katas until referee Donny Carolei gets frustrated and clobbers them both with a fire extinguisher? Stay tuned!
Posted by Jim Genia at 4:01 PM 2 comments: 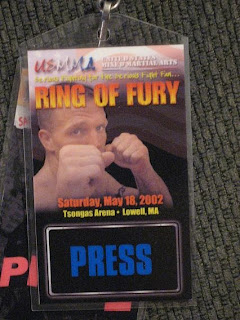 Long Island-based American Freestyle/New Generation Karate's journey up to Vermont to compete at the Caged Rage MMA show this past weekend resulted in another sweep by the up-and-coming fight team. UCL veteran Chris Corr racked up another win, this time securing a guillotine in the first round, while Eric Blasich nailed a 46-second rear naked choke and Will Lucas won via unanimous decision. How was the event itself? Says Rudy Luna of American Freestyle: "Run very well. Great crowd. Weigh-ins at the local Harley Davidson store with the rock radio station doing a live show. Nice cage. Impressive." Congrats again to the UCL Away Team!
Posted by Jim Genia at 10:12 AM No comments: