Israel Martinez: Have Fists Will Travel

This Saturday, Locked in the Cage will turn Philadelphia into madhouse with its usual blend of top-notch pro MMA mixed with bouts featuring up-and-coming amateurs.  And yes, while it's a big deal that former UCL champ Kenny Rivera will be debuting as a pro that night, tucked away further down the card is another UCL vet, and that bout has got me excited, too.  Resident heavyweight slugger and longtime badass Israel Martinez will be making the trek down to the City of Brotherly Love for a taste of sanctioned combat.  Want the 411 on this 28-year-old karate black belt?  A man who won his last fight via TKO in about seven seconds?  Hey, that's what I'm here for.

How did Israel get into MMA?  "At first I wanted to be a kickboxer," he says.  "At the time, I didn't like the brutality in MMA.  It was ridiculous.  Freakin' 300-pound guys against guys that are 150 pounds.  So I never thought about it.  Then, after a while, I started watching it, and I saw that it wasn't as brutal anymore.  You know, it was people trying to display their skills rather than trying to rip their heads off.  And I knew I could do it - I figured I could do it because I've been kicking ass my whole life.  And I was wrong.  Basically, I had to start from scratch.  The one thing I kept from everything that I learned before was my footwork from karate.  Other than that, I had to start from scratch."

Where does Israel train?  "Now I'm kind of in between gyms.  I started off at Jungle Gym in the Bronx.  Actually, I got kicked out of there for taking my first fight [in the UCL] without permission.  After that I opened up my own gym - a kickboxing gym - for about a year.  Then I closed that down, trained at Lions Roar Muay Thai... and now I train on my own at a boxing gym nearby."

Why travel to Philly to fight when sanctioned amateur bouts can be had in New Jersey?  Says Israel: "I haven't actually tried [to get a fight in New Jersey].  [LITC] just asked, they needed a fighter at my weight class, and I just jumped in."  He adds, "The major places in New Jersey, they kind of look for people from major gyms so they'll bring a crowd.  And I don't bring a crowd, so I've reached out and I don't get any answers."

Usually, Israel steps into the ring around 230 pounds.  Does he believe that's his best weight?  "My best weight I have yet to see.  All my fights have been at heavyweight and last-minute.  Given ample time... I could make 205."

In his last bout, he TKO'd his opponent in seconds with a front kick.  How did that bout come about?  "I was out drinking the night before my last fight in the UCL," he says.  "It was like one in the morning - well, technically, that's the day of - and I was on my second cup of liquor, and they hit me up out of nowhere, out of the complete blue, saying, 'Yeah, yeah, you're on for tomorrow.'  I was like, 'Man!'"  Thankfully, his fight was over quickly.  "That's why I went for the knockout blow.  Thank God it worked, because the guys was in good shape.  If I didn't knock his ass out, we would've been there all night."

For those who haven't seen Israel fight, how would he describe himself as a fighter?  "I'm actually trying to find myself as a fighter," he says.  "I think of myself as a kickboxer, because that's what I've been doing my whole life, but my jiu-jitsu is pretty good.  It's better than good."

And there you have it.  Israel Martinez.  Watch out, Philly. 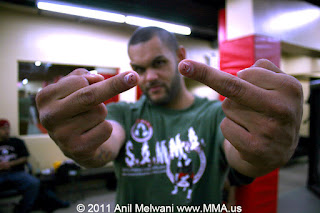