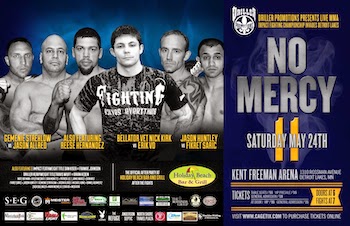 A fighter competing in a Minnesota regional show is recovering after suffering a near-death experience after a bout on Saturday night. Dan Kiser is the fighter's name, No Mercy II was the show, and the injury came about after Kiser was stunned by an up-kick and was immediately choked out.

Here's local news site MNMMANEWS with the details of how it went down:


After some ground and pound, Kiser stood up and looked to rain down punches on the grounded Johnson. But Johnson landed a couple of up-kicks, hurting Kiser. After the second up-kick landed, Kiser was visibly stunned and a scramble ensued. Kiser grabbed on to Johnson's leg and looked for a kneebar.

After a few moments, Kiser's body went limp. It did not appear that Johnson landed any other significant strikes. Johnson latched on to a rear-naked choke and the ref quickly noticed Kiser was unresponsive and stopped the fight.

After Johnson let go of the choke, Kiser did not wake up. He stopped breathing momentarily, but was breathing again when he was put in the ambulance. He was taken to a local hospital and then was moved to Sanford Medical Center in Fargo, where he remains today.

Obviously it's tragic any time a fighter is injured to the point where it's unclear if he'll live, but what does this have to do with New York MMA? Oh, you know, just the whole "sufficient cageside medical care" thing.
Posted by Jim Genia at 8:31 AM

This story does not look good forcthe sport.
Especially it being being MMA.
Now Reilys gay but will have aother excuse.

But then again, in Boxing, Football, Hockey, didnt a life threating situation happen ?