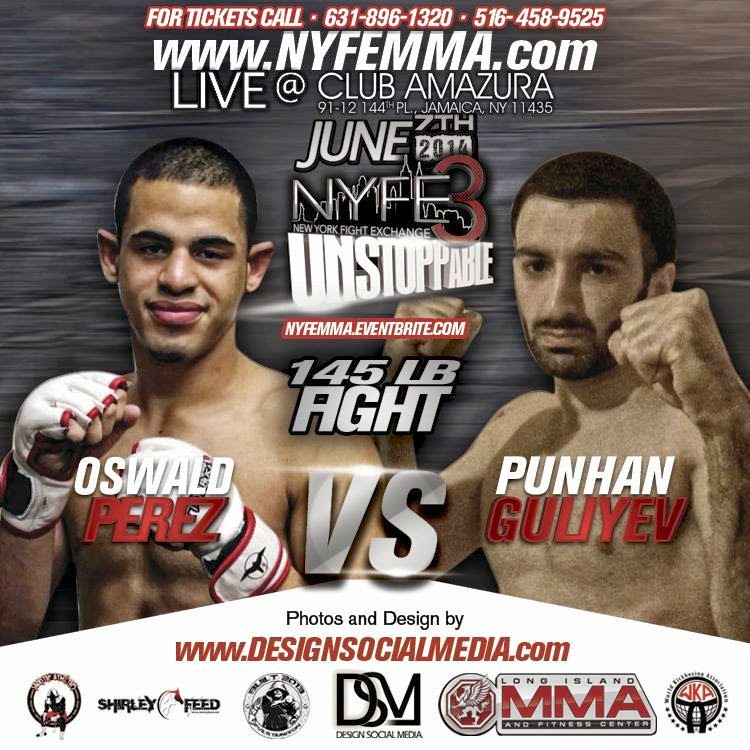 Oswald Perez is really, really good at tapping people out. Don't believe me? Then consider this: every time he steps into the cage, he emerges with the "W" by way of armlock. That's a pretty impressive feat, and you can credit the 21-year-old Jungle Gym instructor's success on a number of things - his top-notch training background, his work ethic, his talent. But regardless of the how and why, the fact of the matter is he's getting it done, and on Saturday, at New York Fight Exchange 3, Perez will have another opportunity to get it done.

The MMA Journalist caught up with the Bronx native for a quick interview. Read on for a little insight on the submission machine.


I know you're a Jungle Gym guy, but talk a little about your training background.
I started training BJJ in July of 2006 with Master Chim at a past Jungle Gym location. I was a mess physically and extremely out of shape. For the first I'd say year to year and a half I was not very consistent with training. The gym was a bit far from my home, and my mom wasn't to keen on letting me go often by myself on public transportation. After about two years Master Chim approached me with the opportunity to be an assistant in the kids program and be able to train for free in exchange. I jumped at the opportunity and began to train much more frequently. I did strictly Jiu Jitsu tournaments for the first five or six years if training. I would take MMA ground classes, and standup sparring classes but my focus was on Jiu Jitsu tournaments and I found a moderate amount of success. Towards the middle of 2012 is when I began to train MMA extensively, and I had my first fight in January of 2013.

You've been fighting for Aggressive Combat Championship and kicking ass - why the change of scenery with the NYFE?
Aggressive Combat Championships has been great to me and gave me a platform to have fights consistently in the first year of my career. I was supposed to fight on their last card in May but we couldn't secure an opponent for that day, but it wasn't for a lack of effort! Being on the NYFE card allows me to still get a fight not to far from where was originally planned. I am very excited to be on this NYFE card, and take on some of their featherweight talent.

How long do you plan on fighting amateur? Any designs on where you'll fight when you turn pro?
I am in no rush to turn pro, and for that it would be whenever Master Chim my instructor thinks that I am ready. I still have many areas that need improving upon, and there are many tough opponents in the amateur ranks. The time will come but when I'm not sure. As for where I would fight possibly. Following in the footsteps of my teammate Leo Muniz who is undefeated as a pro at Ring Of Combat would be ideal. But wherever I am scheduled for I'll be ready.

What do you know about your NYFE opponent and what are you expecting from the fight?
I had a different opponent from before and just recently had it changed over to Nestor. I know that he has a solid 4-1 record with all wins coming by submission like myself. I am expecting my toughest fight as of yet, and an opponent who will be ready to fight wherever the fight moves to.
Posted by Jim Genia at 9:30 AM