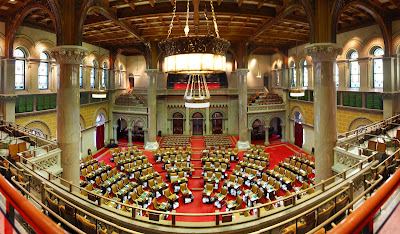 Last week the New York State Assembly's Democrats met in a closed-door conference to chew over the topic of legalizing mixed martial arts, and after 90 minutes, no decision was reached. But while the discussion was tabled for a later date, the battle - unseen, and conducted via email, phone and face-to-face meetings - has continued to rage.

A current count of those within the conference who support the MMA bill and those against it have proponents of the sport extremely close to the magic number. Extremely close. So close, in fact, that of the dozen undecideds, about only half need to be swayed to get the bill out of conference and onto the floor for a general vote. Such a narrow range of Assembly members makes for much easier targets to hone in on.

As of this writing, I have reached out to over 100 MMA supporters - fellow media members, promoters, coaches, industry insiders, past and present amateur and pro fighters based in New York, and even a former Assemblyman - and in turn they're contacting one or more of those undecided dozen. Some have scheduled meetings with the Assemblymen or their staff, and in the cases of the promoters and coaches, they're spreading the word among their people, encouraging them to do the same.

And I'm not alone in my efforts, as there are others rallying the troops as well, prompting supporters within their own network to make their presence and opinion known to those 12 undecideds.

It's early May and already the legislative session is beginning to wane. But lobbyists for the cause are continuing to fight, and they're bolstered by a grassroots army of supporters, all of us battling for the same thing: to get sanctioned mixed martial arts into New York.
Posted by Jim Genia at 2:24 PM