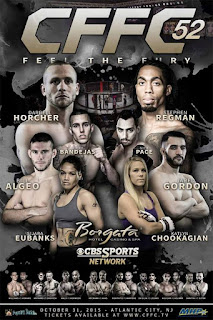 Cage Fury Fighting Championships touches down in Atlantic City, N.J. for their 52nd show, and whether you're watching from the bleachers or on CBS Sports Network, you're in for a treat. A UFC vet who's been out of action since 2011 will return to begin his climb back into the spotlight, a rising star lightweight will fight for a belt, and a pair of ladies will throw down. Interested? Well, if you're still on the fence, here are five reasons why you should care about CFFC 52: