Dana White Is Coming to ROC 53 - Who Will Impress Him? 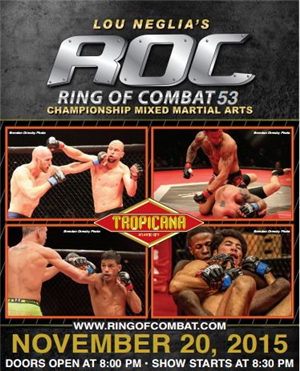 Ring of Combat's 53rd show will go down on November 20 at the Tropicana in Atlantic City, N.J., and as always, it will provide all the usual thrills and violence. But thanks to a UFC president filming a reality TV show, this event will be special - very special.

In case you haven't heard, Dana White will be present with camera crew and discerning eye, all for the sake of "Dana White: Looking for a Fight". The premise of the show is, duh, White uncovering talent at regional shows, and in the pilot we saw superhero Sage Northcutt get discovered. Who, if anyone, will be the "Sage Northcutt" of ROC 53? Well, I have some theories...


(And obviously, this is all contingent on these fighters having "on" nights, and their opponents not kicking their ass!)