Five Reasons Why You Should Care About Aggressive Combat Championships 15 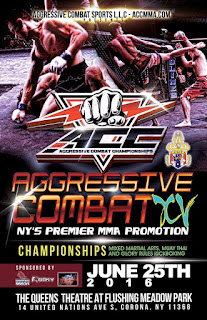 Tonight's going to be a busy night in New York City, and a big part of that flurry of activity is because of Aggressive Combat Championships 15, which will take over the Queens Theater in Flushing Meadows Park. Why should you care about this event? Well, I've got five good reasons!