There are coaches who make jiu-jitsu competitors and coaches who make MMA fighters. Justin Garcia - whose school, the Jungle Gym, is nestled under the elevated tracks of the 6 train in the Bronx - makes warriors. I know this because I've seen his "tribe" go to war, at Ring of Combat in Atlantic City, N.J., and at nearby amateur MMA shows. The chants, the cheers, the ferocity, the unity - it's not hard to imagine that in another time and another place, the walls of the Jungle Gym would be adorned with the ears and scalps of foes long since vanquished.

Of course, I don't actually expect to see dangling ears or scalps today. Such savagery has no place in the modern world (the gym's Bronx location notwithstanding), and Justin's more about the whole "pressure to power" philosophy than crushing enemies and hearing the lamentations of their women. No, on the short drive across the RFK Bridge and up the Bruckner, I'm anticipating a friendly vibe and a chat with one of the best instructors in the Five Boroughs.

I first met Justin (a.k.a. "Master Chim") in 2005, at a Sportfighting event in Hoboken. Sportfighting was the short-lived MMA venture of Brian Cimins, the man behind Grapplers Quest, and just prior to Justin's dramatic and intense entrance, some kid named Frankie Edgar had choked out a local fan-favorite named Jay Isip. But all that came before on that night and all that came after paled in comparison to the fire Justin brought into the ring with him, and the audience packed into the gymnasium at the Stevens Institute of Technology responded in kind. And if, by some strange miracle, a reporter from the New York Times or ESPN had wandered into the venue and sat through the whole show on that chilly December evening (and it was fucking cold outside, believe me), the sum of the resulting article would've been about the god of war from the Bronx and the devastation he had wrought.

But it's 2014 now, and as I enter the gym and am directed into Justin's office, I'm greeted by the natural evolution of jiu-jitsu black belt and fighting badass-turned wise instructor. Sure, his walls are adorned with weapons - a Spartan spear, a katana, a pair of rapiers, an axe, and even a Klingon bat'leth - but his shelves are thick with books on a wide range of subjects, and the framed picture on his desk of his wife and three young sons in jiu-jitsu gis speaks volumes of just how that erupting volcano of a temperament was cooled. 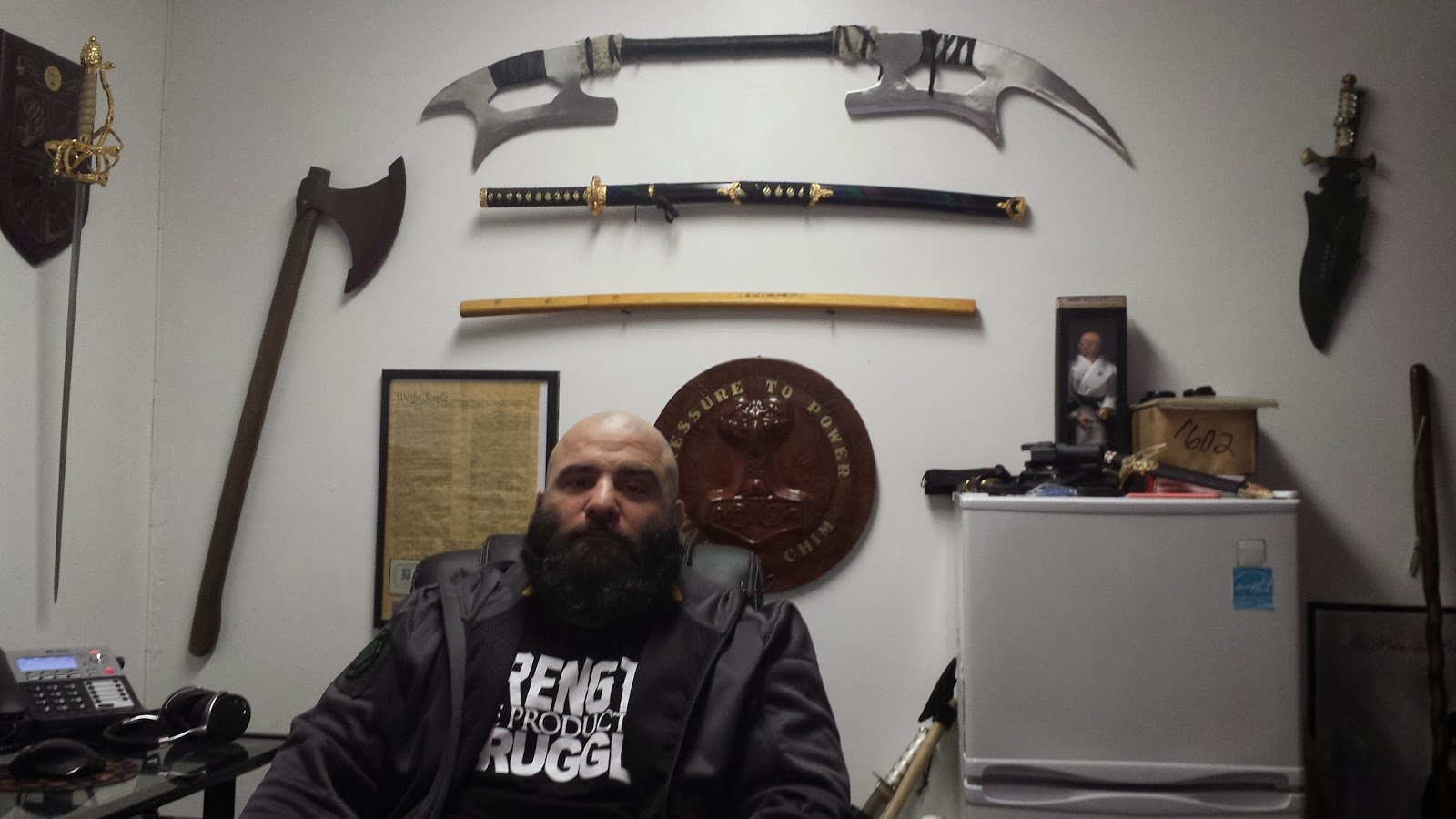 Justin's very forthcoming when we talk, and when I ask of how his training has produced so many successful fighters - like Ring of Combat champ Joe Aviles, the up-and-comer Leo Muniz (who won via KO at the last ROC), and the numerous amateur fighters who've been dominant lately - he paints a picture of a close-knit group of guys who endure hell together, both of the physical and mental variety.

Justin fought only twice before hanging up the gloves, and admits he hated fighting. But it helped create the blueprint he now uses when he builds his warriors.


"I like watching high-level competition, but the world isn't made of high-level competitors. To me, the bridge from the bottom to the top, that's the value of what we do. It's not about making a great sword out of the best steel - win a war with wooden stakes, that's impressive to me."

To follow Justin on social media is to see tons of videos of Jungle Gym fighters in training. One vid had them kicking each other in the thigh - no pads, no checking, just shin on muscle and tons of pain. Another vid had everyone, Justin included, taking a blast of pepper spray to the face. I ask about that.


"When it comes down to it, everybody was scared shitless - myself included. And that's exactly why we had to do it."

Justin on the two Lloyd Irvin students who were acquitted of raping their teammate:


"There is a core story that everyone agrees on. Just taking that - just taking the part of the story of what transpired that night that everybody agrees on, for me is enough to call both of them two pieces of absolute shit that I would love nothing more than to be able to express to them how I feel like they need to make amends. There should be some consequence for what they did to their teammate."

With the camera off, we chat a little more - about how he homeschools his children and how he wants to have more of them, about his misspent youth and the self-administered course correction he gave his life, about college and forging his own path. And then we're done, having talked nonstop for an hour.

We shake hands. I'll see him again on Saturday night in Queens, at the Aggressive Combat Championship MMA show, where he'll be leading a cadre of scrappers one by one into the cage, and shouting sagely advice from cageside when the leather is flying and the submission openings are popping up suddenly and disappearing even faster.

Will his fighters be prepared on Saturday night? Watch the two following videos posted of his team in training, then decide for yourself. One thing I know for sure: because of Justin, they'll be as hard as freakin' nails.