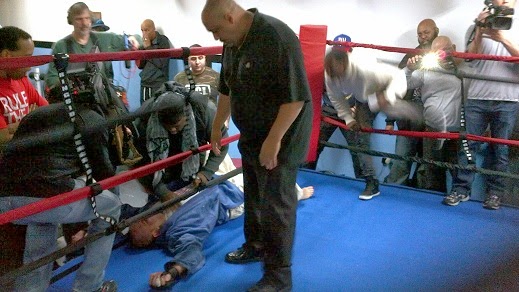 Amateur MMA competitions are turning into big business in New York State, with 2013 seeing close to 50 such events happening compared to 24 the year before (and seven the year before that). However, thanks to how the combative sports law is written, amateur MMA - while legal - is completely unregulated by the State. If State Senator Timothy Kennedy (63rd District) has his way, that won't be for long.

The bill Senator Kennedy has introduced is S06795, and it proposes the regulation of amateur martial arts (not just MMA). Here are the salient points of the proposed legislation:

Right off the bat, a few things stick out that make this bill problematic.

First, the bill goes to great lengths to list the minimum requirements of the seven members of the commission, and they include one member being a licensed attorney, another being a licensed doctor, one member having a PhD. in education, one member having a masters degree in physical education, and two members holding fourth-degree black belts. The commission chairman himself must have a masters degree in education or business, ten years as a black belt, five years experience as a combative sports judge or referee, and experience in the medical field. That's a pretty tall order. All of it is.

The other issue with the bill is that it proposes the regulation of all amateur martial arts training facilities. That means that every little dojo, school or corner of the gym where mats are thrown down for jiu-jitsu would have to be overseen. Since there are probably about as many such places for training amateur martial arts as there are stars in the sky, that would require incredible oversight - and an incredible budget to afford it.

Senator Kennedy has no other sponsors helping out with the bill, and on March 11 his baby was refereed to a subcommittee. Odds are the bill will go nowhere. But what the bill does tell us is that New York State legislators are at least somewhat aware of the amateur MMA explosion, and some have been moved to do something about it.

I've reached out to Senator Kennedy for a statement. We'll see what he says when he responds.
Posted by Jim Genia at 12:38 PM

God NY MMA fans can't get a win. I'm sure this senator doesn't even care about the issue, it's just his way of trying to make a name for himself. SMDH

Agreed on both points. Senator Kennedy needs to be better educated on the issue, but it's not even clear that he cares enough about it given the way the legislation is written.

Hopefully New York will catch a break soon with the Zuffa vs. New York lawsuit.