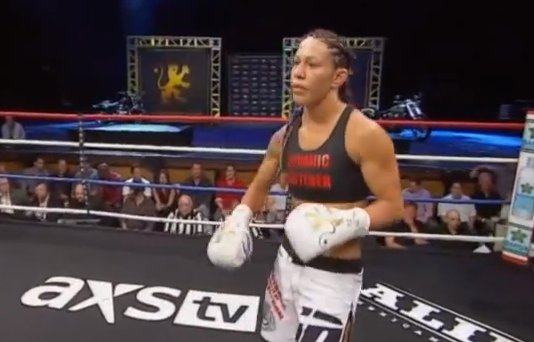 She may be one of the baddest female MMA fighters on the planet, and the last legitimate opponent to Ronda Rousey, but Cris Cyborg isn't invincible. Last night, she took on a vastly more experienced kickboxer at Lion Fight 14 for a championship belt in Muay Thai, and though Cyborg fought valiantly, she pretty much got her ass kicked.
Of course, there's no shame in that. Muay Thai is a different sport than MMA, so success in one isn't indicative of success in the other. In fact, it's actually commendable that Cyborg stepped out of her comfort zone to do this.

Anyway, watch the fight below. Then let me know if you think this hurts her chances of getting that fight with Rousey.
Posted by Jim Genia at 11:12 AM