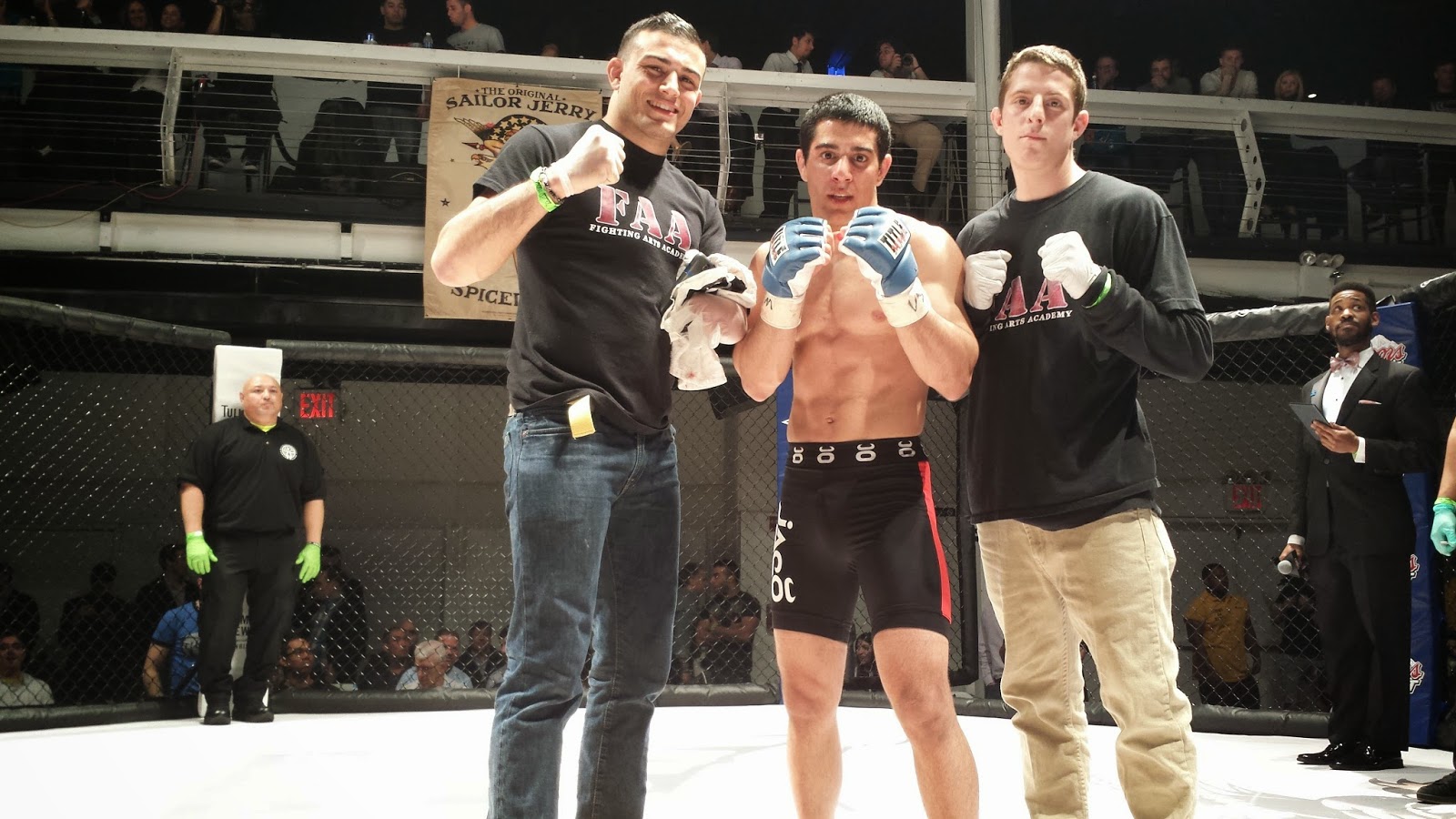 The New York MMA bar has been set once again to new heights, courtesy of Victory Combat Sports' Victory V show at Terminal 5 in Manhattan and the 20 fighters who left it all in the cage last night. With 2,100 thrilled onlookers crammed into the venue, battles raged for the sake of two championship belts, and yet even in those bouts where no titles were up for grabs, wars were waged still.

One such war came where few least expected it.

Since October, GMMA Fights representative Rich Pabon has fought six times for various promotions, sometimes coming out on top and sometimes falling short. But he was firing on all cylinders when he squared off against Team Renzo product Takahiro Ishikawa, who came all the way from Japan to throw down and ended up in the kind of back-and-forth, seesaw contest that makes crowds wild. Ishikawa brought a great transitional game into the cage with him, and scored reversal after reversal. Pabon wouldn't be denied though, and zigged whenever Ishikawa thought he would zag. The result: an elated audience, a split decision for Pabon, and the well-deserved moniker of "fight of the night".


New York Combat Sambo's Hassan Hope and Asylum Fight Team's Brad Bateman put on a similar show. For three full rounds they poured their all into the fisticuff, giving and receiving the kind of hell that makes most men wither. Hope took the split decision as well, but it's hard to say that Bateman didn't come away from the bout with more fans than he had going in.


GMMA welterweight champ Bernardo Cano strode to the cage already a hometown hero with a ton of fans and hype, and when he landed a spinning backfist on opponent Rob Ovalle that sent him tumbling to the canvas 19 seconds into the bout, it was as if the VCS welterweight title they were scrapping for was just within Cano's reach. But Ovalle, it seems, is carved out of wood, and when he recovered, he began to gradually impose his will in the grappling department, neutralizing Cano's edge on the feet.

By Round 3, Cano was tired, and Ovalle capitalized with a smooth rear naked choke.

Afterward, Cano was apologetic and dejected. Meanwhile, with the VCS belts strapped around his waist, Ovalle was elated. A quality win over a quality opponent, and now Ovalle - who trains under PRIDE vet Luis Azeredo at ClassOne MMA in Brooklyn - is the man to beat at 170 pounds.
C3 Athletics standout Marcus Surin has been the man to beat at 155 pounds for quite a while, so Ovalle's teammate Yuting Hong stepped up to the plate and swung for the fences. But as has been the case in the past, Surin's tight blend of wrestling and jiu-jitsu was just too much, and though Hong was game and escaped from some hairy situations, he was caught in Round 3 - the victim of one of Surin's head/arm chokes.


Other highlights of the night included Ali Zebian's spirited performance against Carlos Monteiro, which resulted in a TKO in Zebian's favor and a grin on coach (and WSOF top contender) Nick Newell's mug; John Pina's out-of-nowhere crushing knockout over a tough Mike Casill four seconds into the second round; Ronin Athletics rep Adrian Czmielewski, who avoided getting clobbered by Jairo Israel Machuca by executing a flawless game plan on the ground; and, C3 Athletic's fighter Adam Pakiela's inspired donnybrook against Asylum Fight Team's top fighter, Ethan Gomes.
Fantastic fights, top-flight atmosphere and a crowd that loved it all - VCS's Victory V show was everything an MMA event should be. It was a home run, and it's going to be hard to top it.

It was a good win over a tough opponent. The belt is well-deserved.