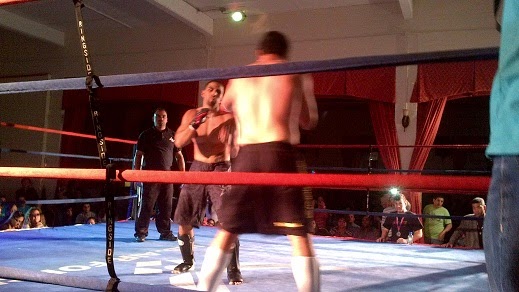 Aggressive Combat Championship 6 is the next big MMA show on deck for New York City, with an installment all set for Saturday night at York College in Jamaica, Queens. Yes, there will be fighters, both of the amateur MMA and Muay Thai variety, and a number of local schools will be well-represented.

By way of a preview, The MMA Journalist caught up with Eugene Perez - one of the men behind Aggressive - for a quick Q & A session. Enjoy!


There are a number of MMA promotions active in the New York market. Where does Aggressive fit in?

Perez: "I would put Aggressive right at the top of the list. As of right now, we have more shows than any of the other leagues. We're going on our sixth MMA show this Saturday, we already have our seventh and eighth planned, and we'll probably have a ninth one before the year is done. So in a year and a half span, we'll bang out about ten shows."

Why so many shows?

What sets Aggressive apart from the Victory Combat Sports, New York Fight Exchanges and Golden MMA Championships of the world?

Perez: "I think a big thing is our tiered approach. We have what we call our 'novice' rules, which are like the New Jersey State athletic commission's rules in that we don't allow ground and pound to the face, [the fighters] have to wear shin guards. After they've had had two match, and we can get the two sides to agree - and the opponent has had two matches - they can step it up and do advanced amateur rules, which will allow hand strikes to the face [on the ground] and they can take the shin guards off. We still don't allow elbows, or knees to the face, and we also don't allow any twisting leglocks."

You do a lot of shows within the confines of New York City. Any plans on expanding further out in New York State?

Perez: "I'm actually working on something with Grapplers Quest right now. Grapplers Quest is going to be doing a three-day Grapplers Quest Olympics up Liverpool, New York, and I've been asked along with my partner Tom Kilkenny to put together a Team USA to take on Team Canada as part of that extravaganza. That will be taking place in October."

Where do you see Aggressive in five years?

Perez: "That's all going to depend on where New York MMA is. Once New York becomes 'legal', we'll see where it goes from there. We will look into expanding into other states. We already have a division in Florida that Jerry Mendez is running. If there's demand for it in other states, then we'll be there."
Posted by Jim Genia at 10:29 PM