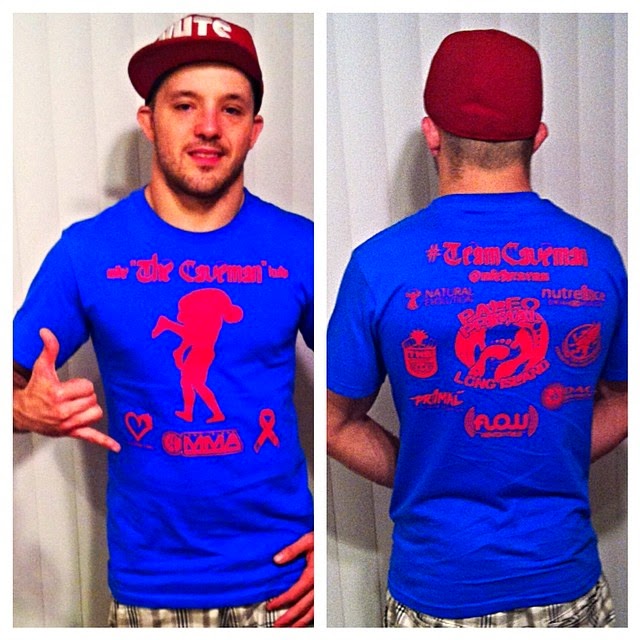 Twenty-six-year-old West Islip native Mike Kuhn will be stepping up to the plate big time on Saturday night, as he takes on fellow top bantamweight contender Elijah Punzone at New York Fight Exchange 3 for a shiny new championship belt.

Who is Kuhn and what's he all about? To get some insight, The MMA Journalist reached out to him, and Kuhn was gracious enough to reply. Read and enjoy.


Talk about your training background - did you wrestle, where do you train, competition experience, etc.?
I trained in traditional Japanese Jujutsu for many years under Shihan Allie Alberigo and judo under Sensei Maria DiDio from when I was a kid. I started youth wrestling in 5th grade and wrestled all the way throughout high school at West Islip High School. I also helped formed the club wrestling team at SUNY Cortland my senior year of college back in 2008 (a program that is still running). However, I joined my gym Long Island MMA in December 2010, as soon as I heard Ryan LaFlare was opening a gym. I knew Ryan for a while through my brother who grew up with him in Lindenhurst, and jumped at the opportunity to train with him. I was actually the first member of LIMMA who did not follow Ryan or Gregg DePasquale over from their gyms. Regarding competition experience, as a wrestler, I won more than I lost, but I was never a standout wrestler, which I now attribute to my lack of understanding regarding proper nutrition. I wrestled 145 & 152 my senior year of high school, yet now 10 years later, we are talking about me competing for the 135 lbs title. I have a laundry list of grappling and judo tournament medals on the national & international level and took 5th at last years blue belt no-gi Pan Ams after losing a tough match on points in the quarterfinals.

Talk about the disappointment of having to do a grappling match instead of an MMA bout at the last NYFE.
I had been training at Long Island MMA for a long time, but between working on my Master's in Nutrition and my day job, I never had the opportunity to put in a full training camp. When my opportunity finally arrived to make my debut on the hands-down best run, most professional local promotion, I was beyond ecstatic. But having that stripped from me, just 10 short days prior to fight time, left me equally devastated. That being said, I am deeply grateful to Mike Washington and Tom Sconzo of NYFE for finding Andre Poveda and thankful of Andre for stepping up on two days notice, to keep me on the card and able to put on a show for my fans. I truly believe everything happens for a reason and my performance in my grappling match, combined with my teammate Al Jones' decision to go pro, left me in the perfect position to make a claim to the inaugural title shot.

What do you have to say to the people who question why that grappling match earned you a shot at the bantamweight belt?
I'm not unrealistic - out of context, a 0-0 fighter challenging for a title against a 4-0 established name does seem odd. But the fact of the matter is I train at the best camp in the Long Island/New York area. I train under and with some of the best names in the business every day. This is the camp of Gregg DePasquale, Ryan LaFlare, Anthony DeAngelo, Dennis Bermudez, Chris Wade, Marcos Galvao, Sergio DaSilva, Alp Ozkilic, Al Jones, NYFE featherweight champion Rob Scotti, soon to be NYFE welter- and middleweight champions Hugh McKenna and Eric Ott, EFC welterweight champion Bobby Bodden, as well my fellow up-and-comers Riqui Pigatti, Rob Diggle, Frank Sforza, Joe Ninomiya, Hannah McGuckin and Chrissy Yandolli.  Steel sharpens steel and I am challenged for whatever my opponents can bring to the table on a daily basis. Also, let's not forget, current UFC middleweight champion and hometown hero Chris Weidman fought arguable the greatest of all time with a 9-0 (5-0 UFC) record and emerged victorious twice. There is something to be said about experience, but I feel that my camp has provided me with a similar level of readiness entering this fight. While I have no intentions on losing, NYFE knows that win, lose or draw, I'm coming out to fight and going to put on a show.

What do you expect out of your opponent Elijah Punzone on Saturday?
I've watched a couple of his fights live now and I liked how I matched up with him, but I've learned first hand that you have to be ready at all times for an opponent change, so I trained hard to be ready for this fight and expect to impose my game plan.

How long do you plan on staying amateur?
That's up to my coaches Gregg DePasquale, Ryan LaFlare, and Anthony DeAngelo at Long Island MMA. As I said earlier, my work/school schedule has interfered with proper training schedules in the past, hopefully I can keep improving and I can just keep moving forward.
Posted by Jim Genia at 9:00 AM