Kung Fu Challenge Matches Are Alive and Well and Awesome 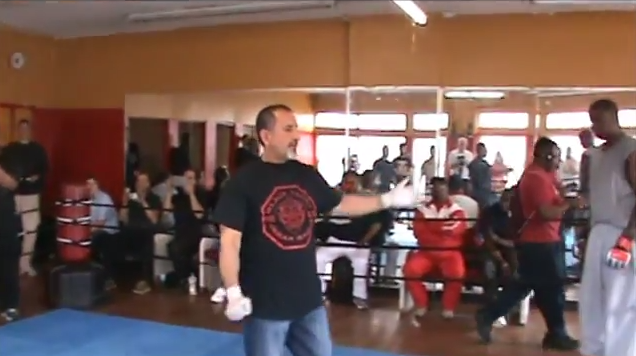 Amazingly, it's the year 2014 and we still have kung fu challenge matches going on in New York City. The video below is one such fight, which occurred very recently and came about because one instructor was badmouthing another and... well, I'll let you read Novell Bell's own words on the matter, since he was one of the combatants.

A lot of people email me about this so called fight against this green cloud kung fu master name Mr. Gus. To be honest with you all I was just toying with this guy. To this day I regret even fighting this man because he had no fighting skills for somebody that supposed to be a Kung Fu master of 40 years experienced. Before I fought this man he claimed to have MMA and Muay Thai fighting experience from a young age. What people do not know about this CLF teacher is he been challenging martial art teachers of other disciplines for years. Recently he challenged coach David Ross of NYC SanDa to a no hold bar fight weeks before I fought against this kung fu master. What people don't know the reason that I fought this man in the first place is he try to involve me and MUSU in his dispute with coach David Ross.

One word led to another and this man told me we can get in the ring . So I obliged his ass. He proceeded to tell me on online how he was goin to educate me in the fighting arts of BaGua and XingYi even though he's known to be a highly skilled Choy Lee Fut Master. before I fought this Master many people advised me to watch out for his powerful hook punches and kicks and...ect Some people even told me them back out of the fight. Because he would try to really hurt me using his Choy Lee Fut kung fu. Anyway once I started the first few seconds of the flight with this man I realize what most the people (Kung Fu Teachers) was telling me about this man fighting abilities was over exaggeration.

I regret I even fought this man because it was truly a waste of my time. The man could not even protect his face from basic Palm strikes and simple jabs. The first time I knocked him down I was hoping the referee who was his friend had stop the fight. Because it was obvious this man do not know how to fight even though he was charging numerous of his students big monthly fees to learn from him his so called famous Choy Lee Fut kung fu.

Anyway I just wanted people to know I was just toying with this Master I'm not saying this to be egotistic either. I am just being honest I could have easily K0 this Master with a head kick if I really wanted too. But one thing I'm not is a bully. On that note I have nothing to gain from this fight because it wasn't a fight in my eyes. The man was not what he claim to be or was he able to execute what he preached and teach.