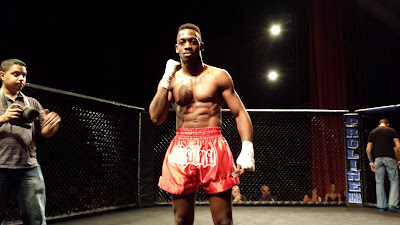 Sometimes drive and determination are the difference between winning and losing in a fight. Sometimes its the skills brought into the cage. At Aggressive Combat Championships 11, which broke ground at the Queens Theater in Flushing Meadows Park on Saturday night, those who came out on top possessed just the right mix of drive, determination and skills - and in the case of lightweight and flyweight studs James Gonzalez and Pedro Villa, that meant going home with shiny new belts.


Serra BJJ rep Gonzalez already owned gold in the ACC organization as the USMTA/Muay Boran League's statewide 155-pound champ, but TSMMA's Jerome Bourne stood in the way of him earning the ACC title at that weight, so "unification" was the magic word when they met on Saturday.

In terms of drive and determination, both men have those traits in plentiful quantities. It was Gonzalez, however, who had the jiu-jitsu skills to get the job done - skills he used to overcome Bourne's superior reach and sharp striking and put his opponent through the submission ringer. The bout was fast, the bout was furious, and the end came when Gonzalez trapped Bourne in a submission from which there would be no escape.

With the win, Gonzalez has done more than enough to cement his position as one of New York City's top lightweights.

Empire MMA's Villa has been in the game a while, and in that time has refined his wrestling skills into something concise and deadly. ACC 11 saw him square off against the ultra-talented ECUBJJ star Christian Medina, and with a flyweight title up for grabs, it was time for these two men to perform at their best. For Medina, that meant a tenacious submission hunt; for Villa, that meant maintaining top position and control, making zero mistakes, and unloading hell with his fists.

Make no mistake: Medina is always a serious threat, and his tenacity and willingness to engage brought the best out of Villa. But "The Hulk" was utterly flawless in his performance, and he more than deserved that belt when all was said and done.


TSMMA's Matt Roman had all the tools he needed to secure the "W" when he stepped into the cage against Musuko MMA's Devon Estrada, and like with Gonzalez and Villa, it was ultimately his grappling that enabled him to seize the day. Or, more aptly, seize the choke.


As usual, ACC brought the goods. The fights were top notch, the Queens Theater was a welcome change from the events that take place in college gymnasiums and nightclubs, and the show ran like a well-oiled machine. Regardless of what happens with the MMA bill being considered by the State Assembly now, Aggressive Combat Championships is well-positioned and very ready for the future.