A Wacky Anti-MMA Editorial and a Response 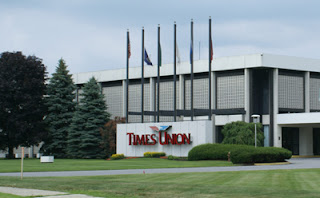 It's crunch time for the legislative session and the prospects of getting the MMA bill passed, so all the anti-UFC lobbyists are coming out of the woodwork to earn their paychecks. The latest: an editorial in today's Albany Times-Union, which is an influential paper that serves the Capitol region.

The gist of the piece is that the sport is too violent and not worth the money it would bring in, but there are some glaring errors in the logic. Consider this excerpt:

UFC is again trying to get professional MMA legalized in New York, the only state where it is still banned. Amateur MMA is already legal, as is training and competing in any martial art.

Advocates of MMA argue that the current situation amounts to allowing an “unregulated, unlicensed, and dangerous” activity to go on, the implication being that legalizing it will make it safer. That’s quite a leap – to suggest that the structured, disciplined, and liability-conscious environment of amateur training is a more dangerous setting than a competition in a cage before a crowd screaming for blood, under the auspices of a for-profit promoter whose business model depends on giving the audience what it wants.

I responded in the comments section. Here's what I wrote:


The author of this editorial does a fine job of trying to make the issue of regulating mixed martial arts in New York about money, but he glosses over the fact that the archaic 1997 statute that bans pro MMA allows for a completely unregulated - and unsafe - amateur version of the sport to happen here. And happen it does, quite frequently (there were 54 amateur MMA events in New York in 2014; we're halfway through 2015 and already the state has hosted 31) and often without the safety precautions that protect fighters when they compete in other states.

The author describes the amateur aspect of the sport in New York as a "...structured, disciplined and liability-conscious environment..." Clearly, the author wasn't there when a fighter at an unregulated amateur event in the Bronx broke his leg in the ring and had to wait 25 lying on a plastic folding table in the back for the ambulance to arrive. Nor was the author present when a fighter in Saratoga Springs broke his hand in a bout, needed reconstructive surgery, and when he asked the promoter about insurance coverage, was laughed at. Also, the author seems to have missed out on that amateur MMA event in Albany that saw a fighter badly TKO'd with a possible orbital bone fracture and concussion, and the fighter subsequently kept trying to book more fights in the following weeks (which would have been prohibited in other states).

Legalizing MMA in New York will empower the athletic commission to regulate both pro and amateur MMA, and amateur MMA needs regulation. Since the sport's inception in 1993, there have been eight deaths attributed to MMA matches worldwide. None occurred in the UFC, while five happened in unsanctioned bouts in South Dakota, Michigan, Bolivia, South Korea and the Ukraine. Currently, New York leads the world in unsanctioned MMA bouts.

Why talk about money when the health and safety of New Yorkers are on the line?


Feel free to follow the link and add your own comment to the Times-Union piece.
Posted by Jim Genia at 8:27 AM