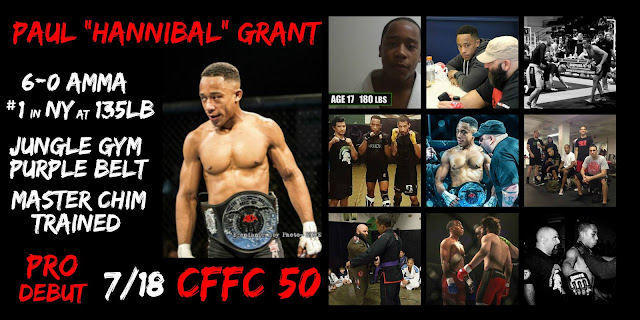 Cage Fury Fighting Championships 50 is tomorrow in Atlantic City, N.J., and while there are a number of fighters of note competing on the card - like TUF vet Tim Williams, Garden State staple Lester Caslow and rising female scrapper Jenna Serio - one competitor worth keeping an eye on is Jungle Gym standout Paul Grant.


Grant is making his pro debut, and it comes hot on the heels of a dominant run in New York City's amateur circuit. He was the New York Fight Exchange's bantamweight champ, reigning undefeated until he announced that he was graduating to the "big leagues" earlier this year, and much of his success can be attributed to a near-flawless ground game, an unrelenting pace, and an unbending spirit.

The dude is an animal. And after the dust settles on CFFC 50, the world will know it.
Posted by Jim Genia at 10:08 AM