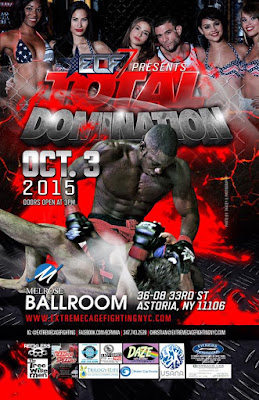 
“We have ECF 7: Total Domination coming this Saturday night at the Melrose Ballroom,” said Christian Defiris, CEO of Extreme Cage Fighting. “This is going to be another action-packed event. Every show we have done has been better than the last, and I really look forward to seeing what the top East Coast martial artists are going to bring to the table this weekend. In the ECF, the best fight here.”

In the main event on Saturday night, the ECF New York State Bantamweight Championship will be on the line, as Carlos Rodriguez defends against Christian Medina. A loaded fight card will accompany that headliner, and doors open for the event at 3:00 PM. Tickets for ECF 7: Total Domination will be available on Saturday at the Melrose Ballroom, which is located at 36-08 33rd Street in Astoria, Queens.

To purchase tickets in advance, fans can do so online via Event Brite: BUY HERE

Extreme Cage Fighting differentiates itself from many other amateur martial arts organizations in that it conducts all of its business operations professionally, and the promotion treats its fighters the same way as well. All participants have complete physicals and bloodwork done prior to competing, and the ECF takes out full MMA insurance for all combatants on its show. To ensure the safety of its fighters, the ECF employs professional cutmen to work corners, with an ambulance and certified EMTs on site at all times. Additionally, the ECF is fully sanctioned by the Professional Kickboxing Federation.

An additional way that the ECF diversifies itself is that it does not pursue sponsors to fatten its own pockets. Rather, the promotion uses those sponsors to provide merchandise for fighters as a token of appreciation. Sponsors for ECF 7: Total Domination include Trilogy4Life alkaline water, East Coast MMA Fight Shop, Spit the Truth clothing and Face Slip fight grease.

Saturday night marks the seventh event hosted by the ECF, which has been holding shows in Brooklyn, Long Island and Queens since 2014. The promotion was created by Christian Defiris after a horrific automobile accident forced him to end his own fighting career. The New York native had over 100 combined fights and matches across the disciplines of MMA, wrestling, Brazilian Jiu-Jitsu, Muay Thai and kickboxing, possessing an exceptional talent that was getting looks from various professional MMA organizations. After the accident, which left his arm paralyzed for six months and led to extensive physical therapy on his neck and back, Defiris was forced to expedite a plan he had for later in life to start his own promotion. After dusting himself off and fully focusing his efforts on that idea, the ECF was created and has continued to gain in popularity and growth since its inception.

Anyone who would like to learn more about Extreme Cage Fighting is strongly encouraged to check out the promotion online at http://extremecagefightingnyc.com. The ECF can also be found on Facebook, Instagram and YouTube.
Posted by Jim Genia at 11:19 AM