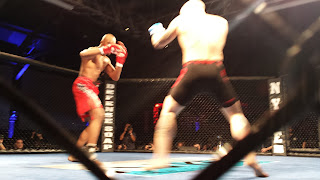 
The folks behind the New York Fight Exchange and Aggressive Combat Championships are the special ones, and that's evidenced by their track records, as well as the quality of the product they produce.

You can pinpoint New York's amateur MMA boom as beginning in early 2013, which is after the State Attorney General admitted that the law banning pro MMA didn't apply to amateur, and after an unofficial "slowly test the waters" period requested of promoters by the New York State Athletic Commission. Then it was game on, and shows sprouted up everywhere. Time has whittled away the field quite a bit, and now NYFE and ACC remain as the sole constants in an equation that always seems to change.

It's impossible for me to say one of these two organizations is better than the other, as they both excel at what they do. NYFE had its champ Paul Grant make the leap to pro MMA in Ring of Combat this year, and had another champ in Sam Watford go directly into Bellator (where he won his debut). Meanwhile, ACC is churning out top fighters like Jillian DeCoursey and Matt Roman, and putting together fights that are definitely "must see". And at the end of the day, both promotions are doing it with the kind of safety standards that few in the state adhere to.

What was the second-most notable thing about New York MMA in 2015? The NYFE and ACC.

*Worth noting is Victory Combat Sports, who owns the distinction of being the first MMA organization to get into Madison Square Garden (back in 2014). Victory is great, too, but they've been on a bit of a hiatus in the latter part of 2015.
Posted by Jim Genia at 11:54 AM

Ny state has grown with MMA tremendously. Few organizations stand out but these are definately the best and well regulated out of all of them. The fighters are good but "top notch" may be a little generous.

"Advertising is your main tool to have the business ready to go. Actually, everybody is busy in their company marketing over the World Wide Web. Unfortunately, online company is scammed with scammers. On occasion the provider hires you freelance, or occasionally it is a site designer which orders the copy google At an identical time, if you decide on the most suitable company having excellent reviews and reputation, you will enjoy well composed works.
http://google.com/ "

Let me say the truth: I hate mma games. Not because the sport itself, but because my ex was a die fan of it. MMA and Buyessay.org coupon codes. I hate them both, that's why telling you about those coupons. Hope you will get them and there's nothing left for him. he literally ruined 3 years of my life