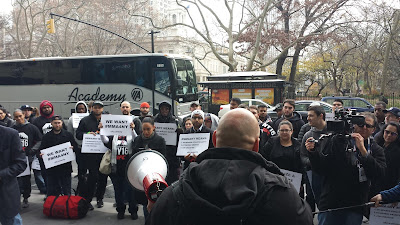 We're counting down the top five most notable aspects of New York MMA from 2015, and we're up to...
#1: You - It was close - so very close - but it didn't happen. That's right, I'm talking about the passage of the MMA Bill, which would have lifted the ban on professional MMA that's been in place since 1997, and it would've taken measures to make amateur iterations of the sport much safer.

However, what did happen is we all got to see how deep and passionate the MMA fanbase is here in New York.


In the final hours of the extended legislative session, when Assembly Speaker Carl Heastie was trying (unsuccessfully) to juggle multiple pieces of pressing legislation, the word came down from on high to bombard his office with some good, old fashioned public outcry. And that's just what happened, with countless fans calling and emailing Speaker Heastie, all voicing their support for MMA in New York.

Then there was the rally last month in downtown Manhattan, which was meant to coincide with an Assembly hearing in combative sport injuries but was held even after that hearing was cancelled. Folks drove down from as far away as South Buffalo just to be there, and everyone was eager to see sanctioned cagefighting finally become legal.

On January 30, the UFC will be coming to the Prudential Center in Newark, N.J., and during that week there will be at least one or two events that are open to the public. As usual, New Yorkers will make up the majority of the people present. Why? Because we're all fans of MMA.

OT: These are two of the all time greatest fighters. I think everyone would love a rematch between Floyd Mayweather and Manny Pacquiao. Question guys,is it really possible? Even though Pacquiao is now recuperating from a shoulder injured surgery, there is still a possibility for a Mayweather vs Pacquiao 2 rematch.