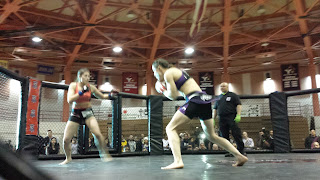 
A jiu-jitsu brown belt under Rob Gutierrez at East Coast United, DeCoursey came into the year already crowned an Aggressive Combat Championship title holder at 115 pounds and marquee fighter when she met Massachusetts native Sarah Click in the New York Fight Exchange in June. She came up short then, losing a hard-fought decision, yet DeCoursey bounced back at the ACC in October, pounding her opponent out within a round in the main event.

That fight was a crucial one. A large-breasted kickboxer had made headlines leading up to the show and drew in extra attention to the event, and when she flailed about and lost on the undercard, it was a potentially damning indictment of the level of female combat sports in the state.

Thankfully, DeCoursey was there to show them how it's done, and demonstrate just how good the fairer sex can be when it comes to kicking ass.

DeCoursey closed out the year in style at the ACC's December 5 show, when she took on Silvia Mondelli and out-boxed the jiu-jitsu black belt for all three rounds.

This year saw plenty of fighters win and climb the ranks and look spectacular. However, none of them carried upon their shoulders the female side of the sport like DeCoursey did. For that, she's one of the most notable things about MMA in New York in 2015.
Posted by Jim Genia at 3:00 PM