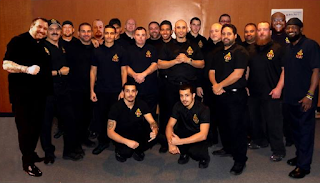 
Obviously, the New York State Athletic Commission couldn't do it (the law prevents them), so some went with the World Kickboxing Association (WKA), which has been sanctioning kickboxing here for years. Others went with the International Sport Karate Association (ISKA), whose track record throughout the country is strong and lengthy. And then there was the United State Muay Thai Association (USMTA), who formed an amateur MMA-centric arm called the Muay Boran League, and carved out a name for themselves as not just a viable alternative, but as a third-party sanctioning organization with more experience keeping fighters in New York cages safe than anyone.

The numbers don't lie. While the WKA has sanctioning duties for the venerable New York Fight Exchange and Friday Night Fights kickboxing show, 2015 saw the USMTA supervise the likes of Victory Combat Sports, Take It To The Top, MMA Platinum Gloves on Long Island, RAVE Promotions, and of course the Aggressive Combat Championships (whose co-promoter, Tom Kilkenny, wears a USMTA hat when not wearing an ACC one).

The USMTA also regularly hosts seminars where they train their officials, and there are numerous instances of them preventing mismatches, stopping suspended fighters from stepping into the cage, and pulling sanctioning from promoters who try to bend the rules.

The notion of sanctioning being a necessity has since worn off, with promoters eventually realizing that it's not a legal requirement. As a result, the ISKA closed up shop in the Empire State, and of the 70 amateur MMA events that took place in 2015, only a fraction deigned to use the services of a third-party organization, which put more fighters at risk than ever before. Yet the USMTA has kept at it.

As sanctioning goes, the WKA is great - they are, in fact, the organization the UFC will use in April if their Madison Square Garden show goes down. But in terms of MVP status in 2015, that honor goes to the USMTA, which has grown, sharpened its game, turned into a well-oiled machine, and become something synonymous with "safety". No organization is perfect - even well-funded athletic commissions make mistakes - but in New York, the USMTA is as good as it gets.
Posted by Jim Genia at 9:00 PM

The organization of the events of this kind requires a special preparation. This involves the participation of some members of the association.

You have such an interesting blog! I love to read your posts and watch videos. I haven't heard about this band before. Is it about spies? Is there any reviews on this band? I like different types of music and I like when one band can play more that 3 in one album. In this case I'm sure they will get rewardedessays for their activity.

Really very useful and Informative information are provided here. Thank you so much for writing keep up like this.