The UFC Lost in Court Today, But What Does It Really Mean? 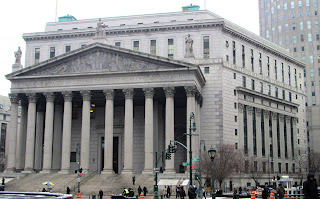 The UFC lost in court today, but it's not as bad as you may think.


In regards to their second lawsuit against the State of New York (Zuffa v. Schneiderman), the UFC had requested a preliminary injunction that would've allowed them to hold an event at Madison Square Garden on April 23. Presiding Judge Kimba Wood denied the motion, effectively killing their plans to come to the Big Apple this spring. Josh Rosenblatt over at Fightland has some insight on what went down (follow him on Twitter - he's been covering this story for a while and has good sources).

So why shouldn't we be throwing our hands in the air in frustration and cursing and spitting on the ground over this development? A few reasons.

First, you have to understand that this second lawsuit and the request for a preliminary injunction were likely meant to accomplish two things: to give the UFC standing and to give the UFC leverage. It looks like they got the former, and thanks to Governor Andrew Cuomo going all in on MMA, they probably no longer need the latter.

If you'll recall, "standing" is the legal tenet that a party must be sufficiently injured by something - in this case, the law banning pro MMA - to be able to get relief from the court. By paying the folks at Madison Square Garden a deposit and officially announcing an event, and then having the show canceled because of the threat of Unconstitutionally vague application of the law, it's presumed the UFC now has the standing needed for their lawsuit to survive.

The leverage the UFC would've gained centered around them being able to circumvent the Athletic Commission and have a third-party organization sanction the April show, which is arguably allowed under a plain reading of the statute. A successful preliminary injunction would've been a green light for a UFC at MSG with zero taxes on gate and broadcasting going to into New York State's coffers - something the UFC could've used as incentive for the legislature to act quickly on the MMA Bill. But nothing beats the support of the governor, which the Legalize MMA movement now has, so that leverage isn't necessary anymore. (Worth noting is that the preliminary injunction was filed long before Governor Cuomo's proposal came out, thereby putting it under "a good idea at the time" status.)

Another point to consider is the timing of the April show and how things are shaping up with the MMA Bill. The MSG event would've only been permissible under the current law - if you change the law, you change the legality of third-party sanctioning. But the governor's inclusion of MMA in his budget proposal put a deadline of March 31 on things (that's the deadline for the State Budget to be resolved), and even before Governor Cuomo announced his proposal, the fight to get the legislature to act on the MMA Bill was intended to get underway even earlier in the 2016 session. That means the law was going to change before the April show, rendering Zuffa's plans of filling MSG with Chris Weidman, Jon Jones and a few thousand screaming fans moot anyway. (Again, hindsight may be 20/20, but the injunction request was certainly a good idea at the time.)

Also keep in mind that the denial of the preliminary injunction doesn't mean the UFC's second lawsuit against New York is dead - the lawsuit is still very much alive.

So what exactly was lost today? In terms of return on investment, the UFC has been taking a hit on the legal side of their battle to get MMA sanctioned in New York. I don't want to use the word "boondoggle", because their efforts in court have allowed amateur MMA to flourish here and that's shaped the lobbying narrative, but geez, the UFC just cannot catch a break in the courtroom.

In the grand scheme of things though, losing the request for preliminary injunction is akin losing a small skirmish in what is ultimately a three-pronged battle in a long, protracted war.

And that war will probably be won soon anyway.
Posted by Jim Genia at 11:44 PM

Exactly what are the other two prongs?

The first lawsuit is on appeal, and the lobbying effort to get the MMA Bill passed. That last one is what's going to win it for us.