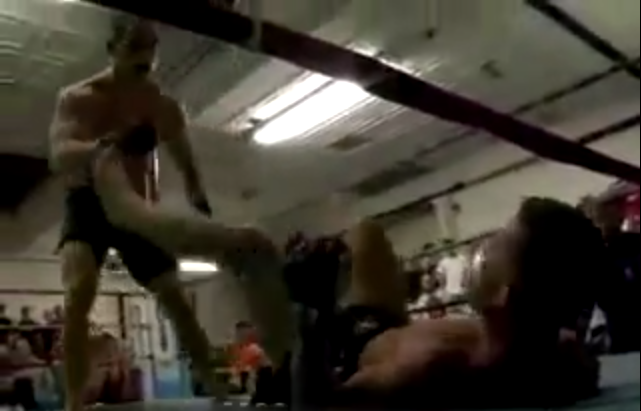 In honor of Frankie Edgar's rematch against B.J. Penn at the TUF 19 Finale on Sunday night, MMAJunkie's Ben Fowlkes has done a story on Edgar's first foray into limited-rules fighting. Yup, I'm talking about the former UFC champ's Underground Combat League bout back in 2005.

Read the article here. And here's an excerpt:


“We didn’t weigh in,” Edgar says of his 2005 debut. “There were no rounds. The gloves I used in the fight were the gloves I was training in for the last four weeks. We just showed up and fought.”

These were the early years of New York’s Underground Combat League, which sprung up in 2003 to give local fighters a place to compete in a state where the sport still remains technically banned.

Oh hey, Fowlkes got some quotes from me. What do you know!


The trade-off, according to Jim Genia, author of “Raw Combat: The Underground World of Mixed Martial Arts,” is a complete lack of regulatory oversight and pre- and postfight medical care.

“They sign a waiver, there’s no screening, and it’s just people agreeing to fight,” says Genia, who has covered the UCL since its inception and who recalls Edgar’s bout against local fighter Eric Uresk as sort of resume-builder gone wrong.

“Everyone thought (Uresk) would be like (former UFC lightweight champion) Sean Sherk; he’d go to the UFC, all that,” Genia says. “Frankie was brought in to lose. He was brought in with the expectation that Eric was going to stomp him. Obviously, it didn’t pan out that way.”

Just to be clear, there will be no headbutts allowed at the UFC on Sunday night.
Posted by Jim Genia at 12:50 PM