Neal Kwatra: The Face of the Culinary Union's Anti-UFC Battle


This morning the Albany Times-Union posted an update on where things stand with getting the MMA bill passed in the Assembly. The focus of the story was the UFC's strategy of robo-calling constituents in the dozen districts still in play, and the reporter included this passage:

Neal Kwatra, a strategist for the anti-MMA effort, panned the robocalls as an ineffective ploy that won't influence anyone.

"After spending millions on propaganda and campaign contributions, without enough support in the Democratic conference, and far below a majority in committee, cage fighting proponents still don't have the support they need," Kwatra said. "But we welcome the robocalls, since everyone in politics knows they are the political equivalent of a technical knockout. You only do them when you know you have already lost, but you need to show your client you are still fighting."

If Kwatra's words seem full of doom and gloom for proponents of sanctioned MMA in New York, that's by design. Kwatra is the man behind Metropolitan Public Strategies, and prior to striking out on his own worked as Deputy Director for Strategic Affairs for UNITE HERE. Here's MMAJunkie with why the name UNITE HERE may sound familiar to you:


Mixed martial fans are, by now, no doubt familiar with the Culinary Workers Union, or UNITE HERE, which represents some 55,000 workers in the Las Vegas area. Not counted among that population are the employees of the non-unionized Station Casinos chain, which operates 18 properties and employs more than 12,000 workers.

Station Casinos is, of course, owned by the Fertitta brothers, who also serve as co-owners of the UFC. As a means of encouraging Station Casinos to unionize, UNITE HERE has often taking to attacking the UFC and its employees, as well as leading the charge against the legalization of MMA in New York.

Back in March Kwatra posted some anti-MMA sentiment on Twitter, to which I replied: 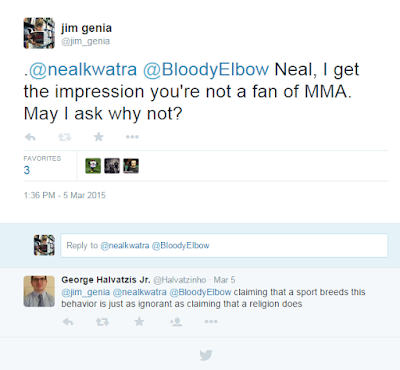 Lobbyists are hired guns, so morality doesn't always come into play when deciding which clients to represent and which issues to pursue. But in an ideal world, the 54 unsanctioned amateur MMA events that occurred in 2014 in New York State - of which only about a third had all the safety precautions required to make an event safe for its competitors - would be factor taken under consideration.

In an ideal world, the fighter who broke his leg in a legal but unregulated fight would be considered.

In an ideal world, the health and safety of Noah Hughes would be considered.

In an ideal world, the discussion about changing the law that prevents the athletic commission from sanctioning the sport wouldn't be about money, and would instead be about protecting New Yorkers.

Unfortunately, we don't live in an ideal world, so legislative causes are taken up with regard only to the desires of the few and not the needs of the many. Oh well.

By the way, when it comes to the MMA bill getting through the Assembly, the more accurate picture is far less gloomy than the one Kwatra paints. To put it in fight terms, Vitor Belfort has just flurried; now it's time for Chris Weidman to take him down and pound him out.
Posted by Jim Genia at 10:45 AM